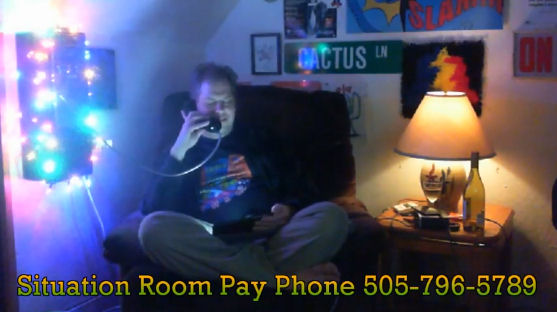 Brad's Cactus Shack
December 15, 2017 Brad Carter 2 Comments
For the past few weeks I’ve been doing a new show called Brad’s Cactus Shack.  In this show I do whatever the hell I want, which usually involves combing through my hard drives for old audio and playing it for you.  I’ve been posting these episodes on Patreon, but they’re not member-only stuff so anyone can go there and listen to them.  The most recent one was a video episode where I sat in a chair for an hour and took calls on a pay phone.  That’s the one embedded above.  Below are links to the 4 episodes of Brad’s Cactus Shack, just in case you missed them on Patreon.

Episode 1  – Telephone Company Assholery – This past weekend I’ve been reorganizing my hard drive IF YOU KNOW WHAT I MEAN and trying to make more sense of the kajillions of files I’ve collected over the years, and I’ve decided that the best thing to do is permanently delete them all.  But not before playing them for you guys to hear in everyone’s favorite new show – Brad’s Cactus Shack.

Episode 2 – What’s Your Bid – In this milestone episode of Brad’s Cactus Shack, I grace you all with radio auction pranks I did in the 1980’s that contain comedic on-the-air gold like “Duuuhhhh, bid on football…” and just yelling garbled crap until the hosts hang up on me.  You don’t want to miss this episode.

Episode 3 – Crossroads Chaos – I found more phone company recordings scattered around various drives, buried several sub-directories deep.  Hopefully these aren’t calls that I played on the first episode.  We also listen to some so-called chaos that I caused at a mall in the mid-2000’s, and we revisit my old neighbor Warren and his super exciting lifestyle.

Episode 4 – An Intimate Evening On The Pay Phone – Today’s Cactus Shack episode is an hour-long call in show where I sit in my comfy recliner and take calls on the pay phone and we basically just scream at each other a lot.  Enjoy!