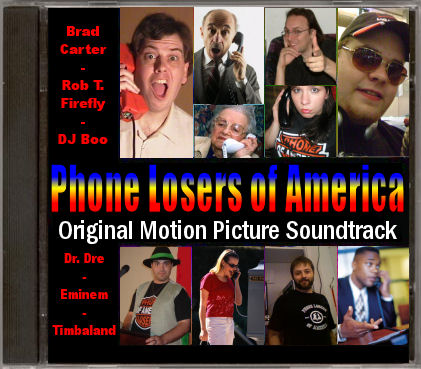 Below are a few songs that are somehow related to the Phone Losers of America. For more music like this, visit RBCP’s music page, Trevelyn’s music page and Rob T Firefly’s audio page.

Flip All The Switches

You know that old prank call you used to do as a kid where you’d call a convenience store and trick the clerk into shutting down all the power to the store, setting off alarms, blowing up gas pumps and leaving the store in a state of complete disarray and confusion? This is a song about that classic prank.

In 2011, Legend did a few calls where he got employees of convenience stores to shut off all the power in the store. Lately breaker flipping has been happening a lot on various prank call shows, so March 2nd, 2015 episode of The Snow Plow Show.

This is a parody song of Abracadabra by The Steve Miller Band.  The lyrics were written by RBCP.  The clips of Pam from Circle K are taken from this phone call by Legend.  The “1! 2! 3!” guy in the song is from another call by Legend. The instrumental for this song was created by Ben Stahl.

This song is about all the perks of having free water included in your rent and the ways that you can take advantage of it. This song was inspired by all of the prank calls we’ve done to apartment managers where we make outrageous claims about things we’ve done inside of our apartments. And THOSE calls were inspired by a comic strip by Toothpaste For Dinner, so basically the TFD guy wrote this song.

This song began it’s birth around October of 2012, according to the dates on the file names, and was finished on September 21st, 2013. The music and lyrics were done by RBCP.

This is a song about phone phreaking in the 1990’s. It’s performed by Bonecage, written by RBCP, and the video footage was recorded by a dozen or so people who submitted footage, including Devan Gladden, Adam Herron, Kuraz, Christopher Miller, David Kilgo, Evie, Adam Wolf, Wedge, Godot, Jarellis Jay, Avery Thomas, RedBoxChiliPepper, Johnicek, Lucian, Will, Jonathan Harchick, and Jack Rosenthal. Here is the video…

Track 01: Guilty Deter This is the first official song ever recorded for the PLA, if you don’t include our old 90’s dance mixes. RBCP wrote the lyrics to this song in January 2005 and included them in UPL issue #29. Shortly after the issue of UPL was released, Rob T. Firefly released this version of the song.

The song is about a 17-year-old character named Deter who wants to be a phone phreak but his conscience keeps interfering with his ideas. (You might remember a guy named Deter from a few of the old PLA issues.) This song is a parody of Guilty Conscience by Eminem and Dr. Dre.

Listen to more from Rob T. Firefly at his home page, his music page and his Myspace.

Track 02: What’s The Difference? This song was included in PLA Radio Episode #3, which was released on February 25th, 2006. The episode revolved around all the fun you could have with Deaf Relay Operators. The lyrics were written by RBCP and the song was performed by a deaf relay operator. It’s a parody of the song called What’s The Difference by Dr. Dre.

Track 03: RBCP on PLA Radio Trevelyn, also known as DJ Boo, wrote this song for PLA Radio where it’s occasionally used as an introduction for the show. Trevelyn has written a lot of phone-related songs and has been featured on Hacker Public Radio. Visit Trevelyn’s page of music and his Myspace.

Track 04: linear This song was written by both linear and RBCP, each writing most of their own parts of the song. It was written in the early 2000’s, then finished up by RBCP and published in UPL issue #29 in January 2005. RBCP recorded the song in July 2006, playing both the part of linear and RBCP. It was featured in PLA Radio Episode #10 on July 22nd, 2006.

Track 05: PLA Radio Cactus Intro This song is usually played at the beginning of episodes of PLA Radio and was originally played in the May 14th, 2006 episode. The original song is called Squeeze 1st Jay-Z. The various people saying “Cactus” are professional voice artists that RBCP tricked into sending sample work to him.

episode #16 of PLA Radio on March 15th, 2008. It features some classic old-school PLA characters, such as Dino Allsman, Jim Bayless and Mildred Monday. It’s a parody of a 1980’s song called Manic Monday by The Bangles. You can learn more about Mildred Monday by visiting our tribute page.

Track 07: Blackhat Life This song isn’t exactly a PLA song, but a mention of PLA Radio is included in it so I’m listing it here. It’s written by Trevelyn and was first played on episode #16 of PLA Radio. Visit Trevelyn’s page of phone music and his Myspace.

Track 08: Introduction to HOPE 2008 This song was played at the beginning of the PLA panel at the 2008 Hackers on Planet Earth convention. It was written and performed by RBCP, and inspired by an idea of Sidepockets. It is a parody of Rick Astley’s Never Gonna Give You Up, or as most people these days know it, the Rickroll. You can watch the accompanying video here. And you can watch a short video of the PLA Panel, including parts of this video, here.

Track 10: Play The Game by RBCP This song is about the most famous superhacker on the interwebs, Curtis Lee Jones. Clips are taken from the dozens of prank phone calls featuring Curtis, which can be found on the CLJ Multimedia Fun Page for Kids.

Track 12: Bell Odyssey by Rob T Firefly The sad tale of a Bell lineman named Bob, going about his daily duties, which include losing his shoe while on a telephone pole and discovering a rewired phone box. This song was written by RBCP and published in PLA Issue #39 on July 27, 1996. Thirteen years later, Rob T Firefly recorded this song.

Track 14: PLA CACTUS by BrrrStickem Here’s a rap song that covers many of the things popular in 2012 on The Phone Show and in PLA, including impersonating the corporate office, messing with pizza customers, Mildred Monday, car dings and Laugh Track Matt. If you hate this song, visit BrrrStickem’s Blog or YouTube page and tell him how you feel.

Track 15: Phonelosers by Tristan Here’s a rap song that covers even more things related to PLA in 2012. Tristan wrote the lyrics which were performed by a Fiverr.com artist. This song has it all, from Richard Cardo to Chris Ellerbeck’s mom. (Zax hacked this website and put this song here for the PLA.)

PLA Radio Song by Cactus Smoke This is song about all the wonderful things you’ll find at PLA.

Welcome To The BotNet by TheN This song isn’t about PLA really, but it’s somehow become well-known on our shows and other related shows.

Supersize – PLA on PCN Here’s Supersize’s song about how PLA is the realest, which hopefully he realizes is improper grammar.

How would you like to have your song added to this page? Well that’s easy…write an awesome song about the PLA and it’ll probably end up here. You can send your songs to rbcp@phonelosers.org.

17 thoughts on “Songs Inspired by the Phone Losers of America”