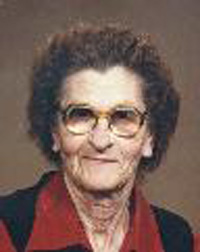 Mildred first came into the lives of the PLA two years before the PLA was even around. In 1992, RBCP picked her at random from a phone book and made a call to her from a pay phone in a movie theater, using a red box to avoid the long distance charges. RBCP pretended that he was an AT&T operator and that Mildred was making a call from a pay phone as Mildred insisted that she was Mildred Monday.

Mildred was pranked once or twice per year for the rest of the 1990’s and always loved to proclaim that she was Mildred Monday, whether we were offering to reshingle her house, give her new siding or charge long distance calls to her. Her threats of shooting us in the hind end with a shot gun always seemed good natured and we imagine that the occasional prank calls gave Mildred something interesting to talk about with her friends and family. We’re certain that her sons would disagree, though.

In 2008, after not calling Mildred Monday for about 10 years, RBCP recorded a song about Mildred and called her to play it for her, but she refused to listen to it since she was on her way out the door. We found out about Mildred’s death about seven months after it happened and dedicated an entire Phone Show to her memory on 9/14/2010.

Below you’ll be able to listen to songs about Mildred Monday and the prank calls from the 1990s to her. You can the original PLA announcement about our loss of Mildred. You’ll be missed, Mildred Monday!