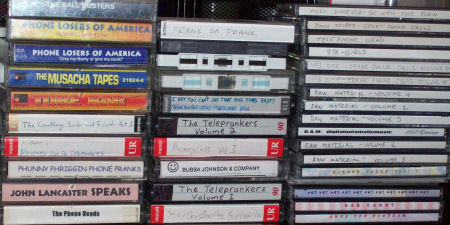 As mentioned in PLA Radio #15, I’m starting up a new contest. The Win RBCP’s Old Prank Call Tapes and CDs Contest! I recently converted my remaining cassette tapes and CDs to mp3s, most of which happened to be prank calls. So now I’m left with several dozen prank call tapes and CDs that I have no use for. So I’m using this contest as a guise for offloading my old crap onto some unsuspecting prank caller who thinks they’re actually winning something cool. I’m a genius!

If you would like to win this excellent collection of prank call history (aka crappy old prank tapes, lots with terrible sound quality) then all you have to do is submit a prank call that you’ve made. Not just any prank call, though. It must be a PLA-themed prank call. Your prank call must include something done in the spirit of the PLA, such as cactusing someone, calling someone from the PLA’s past, reenacting an prank call or an event from our site, or just doing something generally PLA-ey. Get it?

How many of these prank call cassetes/CDs I give out to each winner will depend on how many entries there are and how much effort you put into it. If there’s a lot of entries, I’ll probably let the first place winner have first choice, the second place winner have second choice, etc. If you need some help on how to record your telephone calls, click here for a tutorial. Here’s a semi-complete list of the tapes and CDs you could win:

There’s a little more of it, but some of it is commercially available stuff and I probably shouldn’t mention that I’m giving away CD-Rs of their work. There’s some great prank callers in the mix and some crappy ones. But it’s all fun stuff to listen to. The contest officially starts today and it officially ends on January 15th, 2007. You can submit your pranks by email to rbcp AT phonelosers.org or post them in the forums. Get to work!