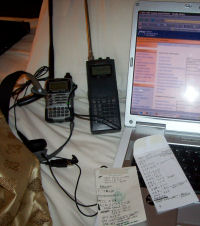 During a recent stay at a very nice and very large hotel in Reno, we decided that lots of fun would happen if we could just find the frequencies to our hotel. Using information given to the maids and maintenance people has always worked out for us in the past. Eventually we got several hotel frequencies by calling up housekeeping and talking a maid out of the FCC ID on her radio. She was more than happy enough to pull the battery out of her radio and read the information to us. Using the FCC’s FCC ID search we were able to find several hotel frequencies and put them to good use. Wait a second, that’s not what this update is about.

This update is about opening up phone jacks in hotel rooms. For some reason, pretty much any large hotel in America thinks a flimsy piece of plastic is adequate protection against people who might want to tap into the phone lines of other rooms in a hotel. When you open up the phone jack in a hotel room, you’ll see something like this: 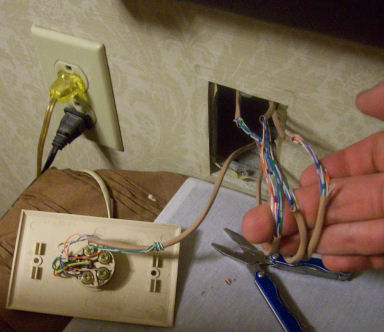 A hotel phone jack should only have one set of wires in it. The wires for your phone line(s). But as you see in the picture, the area behind my phone jack had 3 extra cat5 cables running through it, all easily accessible to anyone with a screwdriver. Using a Leatherman, I was able to strip the insulation from the wires and test the lines on each one. Each of the 3 lines had a dial tone. I only tried the blue/blue-white wires in each cat5 cable since that’s what my phone line was hooked to. But I bet if I kept stripping wires I probably could have found more.

Now a sensible, morally grounded hacker would have said, “Hmmm, that’s interesting” and put the jack back on the wall and maybe anonymously alerted someone in charge of this security flaw. But I’m no hacker – I’m a huge asshole. Team Spessa and I used this elite exploit to irritate dozens of hotel guests and employees in the middle of the night.

I found out the room numbers of each line by calling the front desk from each of them, asking a random question and then saying, “Oh, by the way, what’s our room number?” We ended up with the phone lines for a room upstairs, the room next door to us, and a room two doors down. But I needed to be able to switch between lines so that when hotel security started banging on our door, I could quickly switch them back before answering the door. I’m paranoid, okay? I mean really, what are the odds that anyone would figure it out?

I walked around the streets of Reno, looking for a place that might sell some phone jacks or wiring since I hadn’t come prepared with anything that I could easily hook into these extra lines. During my search I ended up in a sleazy-looking liquor store and was surprised to find that they sold the perfect item – a dual line in-wall phone jack. It was so strange that a liquor store would sell this item. It was the only phone-related item on their shelf, yet it was perfect for my needs. The phone gods were looking out for me. I paid my $2.99 and headed back to the hotel. 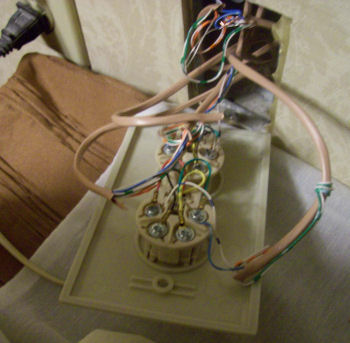 Since the jack had two separate RJ-11 jacks on it, I was able to hook our own room onto the top jack and then one of the other rooms into the bottom jack. This way we could have easy access to another room’s phone jack for days and the maid would never notice it. In the end it looked like this: 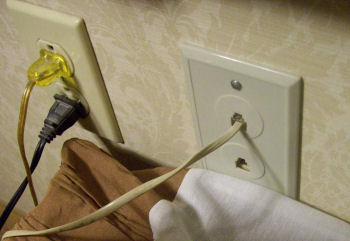 On our last night at the hotel, after a late night of gambling, we entered our room at 2am and began making calls. Team Spessa came up with the crazy idea of pissing off as many people as we possibly could for the sole purpose of going into the lobby and witnessing the chaos. Pissing off the guests was easy enough. Our page of hotel prank calls will convince you of that. But tonight our goal was to get as many guests down in the lobby as possible, so many of our calls were very generic, made for the sole purpose of getting people into the lobby instead of being simply to make us giggle. The giggling would come later. Here’s an idea of how many of the calls went…

For close to an hour we called random rooms all over the hotel. We told one guy that our geiger counter was showing unusual levels of radiation around his room and we needed to move him out of his room. Others were told that they were making too much noise and they needed to come down and prove that they were quiet people. Many of them were upset that we were insisting that they’d ordered room service and would have to come down to have the charges removed. And then there were these people…

In the end, about 40 hotel guests were called with nearly all of them agreeing to come down to the front desk. I visited the front desk near the beginning and witnessed a young couple complaining about their fake room service order to several perplexed employees. And later, Mr. Spessa went down and complained to the front desk about the call that he was going to have to vacate his room for a celebrity. He claimed that he had to wake his entire family and they were all packing their things so they could move to another room. As he stood at the front desk, other guests were complaining to other employees and phone calls from pissed off guests were coming in from other rooms. During this time, Spessa and I took turns looking through our door’s peephole at the guests coming out of their rooms to go to downstairs. The entire hotel was alive with very irritated people.

In the end, the hotel was nice enough to credit all of our nights except for one and apologized for the inconvenience about a bajillion times. So not only did we get to see live entertainment in the lobby, nearly our entire stay was free! Thanks, hotel people!

Be sure to listen to the rest of our hotel calls at https://phonelosers.com/hotel/. There’s a few new calls up, including some that weren’t included in this update.