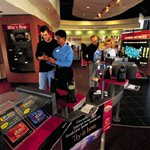 Back in September you might remember reading about my adventure with store display cell phones in a local Office Max. I mentioned that it might be possible to use working display phones and forward their phone calls to a long distance number that you frequenty dial. Well last weekend me and Evilcal tried it out and it works! We were in a Sprint PCS store and there were a few working cell phones there. So on one of the local phones I dialed *72, 1-435-234-8255 and we’ve suddenly got a local dialup for the PLA Voice Bridge. It’s been a week now and it’s still working!

The cool thing is that on my own Sprint PCS phone, I’ve got a service called PCS to PCS Dialing which means that I can call any other Sprint PCS phone any time of day or night and I don’t get charged for airtime. So this means I can call the voice bridge anytime I want and it’s free. The downside? Whoever pays for that Sprint PCS phone in that store gets charged 10 cents a minute whenever I’m on the voice bridge. So in a few months they’re probably going to come and kill me. I don’t know if my number will show up on their phone bill or not, but I’m betting it will. Luckily I think everyone on the bridge is lame so I don’t bother calling it that often.

So is this illegal to do? I personally don’t think it is. Evilcal thinks I’m wrong. I’ve been known to be wrong before and ended up in jail because of it so there’s a small possibility that Evilcal could be right. It seems like it wouldn’t be illegal though, because the Sprint PCS store put service on those phones for customers to come in and try out. There are no rules about what a customer can or cannot do with the phones. Not that I noticed anyway. They want the customers to use the phones. They wouldn’t have them sitting out on display with working service on them if they didn’t. So I’m not doing anything illegal really, am I? It’d be the same as if I went to their store from open to close and sat on the phone the entire time talking to my family 2,000 miles away. That’s definitely not illegal so why should call forwarding the line be any different? The way I see it, I’m not breaking the law, I’m just being an asshole.

But Evilcal sees it a little differently. To him it’s like when a retarded system administrator sets up a system with all kinds of important information on it but forgets to put a password on it. If you log into it and copy all the files, it’s illegal. It’s not legal just because the sysadmin is an idiot. Or if the owner of an ATM machine forgets to lock up the cash door on the machine. Just because it’s unlocked doesn’t mean you can open it up and take all the money home. Not legally anyway. So what do YOU think?