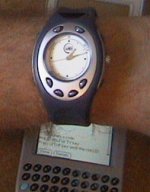 Earlier this year, Radio Shack released a new universal TV remote that’s conveniently shaped just like a wrist watch. I bought one a few months ago planning to have a little fun with TVs in public places. It took awhile, but I finally got around to screwing with a few businesses this past weekend and I highly recommend picking up this item for yourself. It’s only $29.99 at your local Radio Shack and will make your visits to otherwise boring places much more fun!

Me and a friend started out eating at Applebees in Fairview Heights, IL. We took a quick stroll around the bar area, noting the brand names of each of the 3 TVs. Each one was a different brand and the one closest to our table ended up being a GE. I had typed all of the TV codes into my Palm phone so after a few minutes of scrolling through the Palm, I found the correct code and tried it out. It worked perfectly on the TV closest to us when I moved the channel up a notch. Now instead of watching baseball, we were watching football. At first I thought changing channels would quickly get boring, but minutes later the people at the table next to us started bitching amongst themselves about wanting to watch the baseball game. They finally asked the waitress to please change it to the game they were watching. The waitress stood on her tip toes to reach the TV buttons as I interfered with her efforts by changing channels at the same time. I finally let her get it to the correct channel. 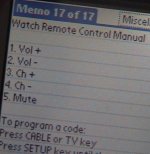 About 15 minutes later during a commercial break, I changed the channel on their TV again. I flipped around for awhile trying to find a channel with cartoons but I ended up settling for the Weather Channel. The group bitched again, signaled a waitress and the process repeated. At one point the old man at the table got up himself, went over to the TV and looked at it for a few minutes probably trying to figure out how to work it. He finally decided it was too complicated and sat back down. After those people finally left another group came in that didn’t seem very interested in the baseball game. So I found the home shopping channel and cranked up the volume as much as I could. Nobody complained to the staff about it so for the rest of the meal we got to listen to the TV screaming at us to buy amazing products. Right around the end of our meal they finally switched it back to baseball. As we paid for our meal and got up to leave, I turned off the TV. Didn’t want to waste electricity you know…

After this it was back to our hometown of Alton. We decided that after having so much fun at Applebees we just had to hit a few bars to try it out some more. Our first stop was a place called Time Out. This place was pretty large. Not only did they have 2 different rooms with bars and tables and Samsung TVs everywhere, they had a room for dancing and a room for betting on horse races via satellite. In the horse racing room, about a dozen people sat at tables staring at the bank of at least 50 large screen RCA TVs on the wall. We started with that room. Unfortunately, the bar wasn’t very busy that night so I was afraid of being spotted in that room. Rather than going inside, we stood at the door and tried to shut them off from there. We only managed to shut off about a half dozen of them from the door. Next week we plan to try again at a busier hour from the back of the room. I’m betting I can shut them all off with just a few hits.

Inside the dance room ended up being much more fun. The bar lined 2 walls of the room and there were 7 – 10 TVs above each side. I programmed my watch for Samsung models and got to work. One press of the button shut off 3 TVs on one wall. Another press shut off a few more on our wall. After awhile the bartender was walking around turning them all back on by hand. As she passed each one, we turned them off again or changed the channels. This went on for awhile and the fun finally ended when my batteries started going dead.

So anyway, yeah it’s not exactly something that people haven’t done before but the watch is very nice! The face of it is an analog display, rather than digital which makes it very hard for someone to think that it could be controlling TVs. The manual says that it works for 15 feet but I’m pretty sure I was further away than 15 feet from some of the TVs in the bar. If you like to screw with people, this is the watch for you! You can click here to order the watch from Radio Shack. As long as you can keep a straight face while you’re doing it, you shouldn’t get your ass kicked by a bunch of dumb hicks who are upset about missing their precious baseball and football games.