Below you’ll find most of the press containing PLA and/or the PLA cast of charaters in them. If you notice anything missing or if you’re interested in an interview, then contact us here.

This is a show on CBC Radio called Day 6. The host contacted Brad to discuss a teenager’s hack into a CIA agent’s email account, which had many similarities to a hack Brad had pulled off years earlier.

Their blurb about the segment says, “Brent Bambury talks to Brad Carter, who has been low tech hacking since the 1990s, when he formed a group called the ‘Phone Losers of America.’ He runs a podcast, where he pranks people into giving out personal information over the phone, just for kicks. He recently tricked a Verizon employee into giving up her unique employee number over the phone. Carter says one way you can protect your email from being hacked the way that CIA director John Brennan’s was is to set up a two-step authentication on your email account, like the kind Gmail offers.”

You can listen to this interview by going to cbc.ca/radio/day6/

After a Comcast customer was prank called by a show called Phone Thugs and Harmony, the customer contacted the Reply All podcast, who figured out that the entire thing was essentially the Phone Losers of America’s fault. Reply All’s host, PJ Vogt, speaks with Brad about how easy it is to trick large companies out of customer data. Listen to the show by clicking here.

The two founding fathers of The FuMP novelty song website talk to Brad about his new song called Free Water, which is about a tenant from hell who’s going to insane lengths to steal water from his land lord. Listen to the show by clicking here

Comedian Anna Hebbel, mother of the hilarious Ed Bassmaster, talks with Brad’s giant cold sore about his crazy antics and they do a few prank calls together. Click here to watch Anna accidentally leave the video aimed at Brad for 50 minutes straight.

An AM news talk radio show chats with Brad about the recent wave of PrankNet hotel pranks in Vancouver, which turned out not to be by PrankNet, but by a local troublemaker. Brad discusses a few of PrankNet’s famous pranks and they take a few calls from listeners. Click here to listen to the 15 minute segment.

This UK based podcast, hosted by Ken Eakins, joins Brad for a 2 hour chat about the history of the Phone Losers of America. “In this weeks show we discuss, Red and Biege-boxing, The legendary Mildred Monday, Cacti, credit card fraud, homelessness, Curtis the Super Hacker, and much more.” Listen to the show by clicking here

Johnny Plankton, from the infamous Zug website, interviews Brad about the PLA’s new book and some of the history of the Phone Losers. “What stands out about Carter’s work is his constant, obsessive quest to turn technology on itself. From intercepting Taco Bell’s wireless headsets to hacking into Walmart’s customer service line, he delights in finding the loophole that lets him use ordinary technology in unexpected ways — to surprise, annoy, or just confuse people. ZUG caught up with Brad Carter as he was changing a ‘BRIDGE OUT’ sign to ‘DRIVE AS FAST AS YOU CAN – NO COPS’ in front of a private golf club for telephone executives.” Read the interview by clicking here.

On December 22nd, 2005, RBCP appeared via satellite for a live interview with Dylan Ratigan on the CNBC show called On The Money. It was some kind of segment on “Corporate Terrorism” at Wal-Mart where they interviewed RBCP for a minute or two and played a couple of our Wal-Mart prank calls. They played Christmas Bows and the call where RBCP gives a customer bogus directions to the store. They also flashed “phonelosers.com” on the screen a few times. Some additional details about the interview are in RBCP’s journal.

The Boston Herald interviewed RBCP for this article, but didn’t use anything from the interview in the article. Click here for the actual article or read it below…

It’s the retailer that some Americans just love to hate. Google “anti Wal-Mart,” and there’s nearly 195,000 hits: from anti-sprawl Web sites, to a union campaign to change Wal-Mart working conditions, to walmartsucks.org (not to be confused with walmart-blows.com). These are the Wal-Mart wars, and the rhetoric at times is nasty.

Nonetheless, the anti-Wal-Mart fervor has come a long way from the debate about mom-and-pop shops being driven out of business when Wal-Mart moves to town. “It’s hit mainstream to bash Wal-Mart,” said Jeff Green, president of Jeff Green Partners, a retail consulting firm in Mill Valley, Calif. “It’s taken on a life of its own.” Wal-Mart is taking notice.

The Bentonville, Ark., company more than tripled its Washington lobbying staff in the past year to help “set the record straight,” Lee Culpepper, Wal-Mart’s vice president of government affairs, told Bloomberg News. Wal-Mart also is funding Wal-Mart for Working Families, a new group introduced this week that will tout the retailer’s positive contributions to communities. “Our job is to just get out some good-news stories about Wal-Mart and try to balance what folks see out there in the press,” said Courtney Lynch, a member of the group’s steering committee, which also includes crooner Pat Boone. Wal-Mart could have its image-makeover work cut out for it, based on survey results released last week by the Pew Research Center for the People & the Press.

While 69 percent of 1,052 adults surveyed had a favorable view of Wal-Mart, ratings were considerably higher for other corporations, including Home Depot (90 percent), Target (85 percent) and McDonald’s (74 percent). Only Pfizer (61 percent), Exxon/Mobil (47 percent) and Halliburton (41 pecent) had lower ratings. More Americans are getting the message spread by groups such as WakeUp Wal-Mart, according to Chris Kofinis, spokesman for the union-backed activist group fighting to improve Wal-Mart employment conditions. But, Kofinis still is not sure that Wal-Mart is really listening. “Hiring more image-makers (and) spending millions of dollars on lobbyists . . . does not solve the problem here,” he said.

We have a small mention in this article on HOPE. Click here to read it on usatoday.com, or read it below…

NEW YORK – Kevin Mitnick, formerly the most notorious hacker in the universe, is trying to explain to a reporter who he is and what he’s doing at a hacker convention. Upstairs at NYC’s Pennsylvania Hotel, over a thousand computer intruders, security professionals, government agents, activists, programmers, politicos and artists, not to mention Mitnick’s mom and grandmother are waiting to hear him speak at The Fifth HOPE (Hackers On Planet Earth). The gathering runs July 9-11.

The first HOPE, held in 1994, was inspired at least in part by Mitnick’s deeds, by the skills and failings of the legal system that pursued him, and by the passionate subculture where people, technology and the law push one another’s boundaries. This year, the conference, part skills exchange, part political confab, part gathering of the clans, goes literally nonstop from Friday morning to late Sunday evening.

Downstairs, the reporter is worried that conference attendees in general and the keynote speaker in particular are a dangerous combination. “Do [the authorities] know you’re here?!” she pipes. Just behind Mitnick, a burly security staffer in a National Security Agency shirt grins.

They know. (Some of the older attendees were in fact on the law-enforcement team that helped track down Mitnick during his cross-country flights.) These days you’re more likely to find a HOPE attendee working to prevent others from stealing your information, attacking you with spam, nibbling away at your personal privacy, or undermining your civil rights.

“If you’re 15 and angry at your dad, you want to go and break something. But the biggest part of hacking is creation,” notes “Acidus,” a speaker at a Friday panel on intellectual property and technology. An engineering student and published security researcher, Acidus was the target last year of an injunction filed by Blackboard, the company that makes one of the US’s most widely used college ID-card systems. The company’s litigation threats were so powerful that Acidus is still not allowed to discuss the details of the settlement or of his findings, which may have pointed to security or privacy problems with the ubiquitous cards.

That’s the sort of hacker crackdown on most minds at HOPE this year. A number of the seminars this weekend are concerned with legal efforts against hackers, not to keep them from stealing credit cards or personal information, but to shut them up when a company or a representative of government doesn’t like what they’re saying. Speakers at talks on everything from corporate litigation to building one’s own nanotech equipment worried that cracking down on hacking will kill not only individual creativity but innovation, eventually harming the very corporations that hound hackers.

Part of the point of bringing hackers together is to give an offline dimension to a culture that tends to be shared mainly in cyberspace. Geek-culture debris, caffeinated mints, tech manuals, t-shirts (slogan-bearing clothing is a major vector of communication in the geek community), more caffeine, hacker magazines, posters, stickers and more is for sale everywhere, and the last official event of the night is a presentation/performance by pranksters Phone Losers of America, a crew funnier than anything yet seen on the likes of Crank Yankers.

But overall, the mood is serious about connecting the dots between security, politics, culture and economics. For every pure-geek seminar this year on, for instance, the working of computer systems in late-model cars, there are three on dealing with copyright lawsuits and Patriot Act privacy dilutions, to the dismay of some who’d prefer to learn the skills now and deal with context down the road. The ubiquitous T-shirts bear out current concerns, political slogans (Stop bitching start a revolution, Watch the watchers, Plead the First, I’ll bet you vote this time hippy) vying with geek-lifestyle musings (Geek is sexy; No machine can replace me until it learns to drink) and gleefully obscure in-jokes (There’s no place like 127.0.0.1 – if you have to ask, the moment is alas lost).

Kevin Mitnick’s t-shirt today, an in-jokey one, says “got root?” The twist on the milk slogan doesn’t signify anything to the fretful reporter, but upstairs as his raptly received keynote and Q&A, he’ll take a question from someone else wearing exactly the same t-shirt, and 95% of the assembled group knows or can guess where the two were purchased and what that says about the wearers’ interests and sensibilities. An attendance to fine detail is, after all, the hallmark of those who care about code Ã¢â‚¬â€œ legal codes, programming code, social codes or what you will. This weekend, the tribes gather to celebrate the pleasures of that heightened state of awareness, and ask themselves how to present that to the world at large as a benefit, not a crime.

During the course of 1 week in 1995, a newspaper in Belleville, Illinois called the Belleville News-Democrat did 3 separate peices on the PLA. Two of them were front page Sunday articles and the other was a mid-week editorial. If you read PLA035, PLA036 and PLA038 you can read the typed versions of these articles along with comments about them. These clippings were stored in a basement for several years before they were scanned so you’ll have to excuse the little black dots – that’s mold. 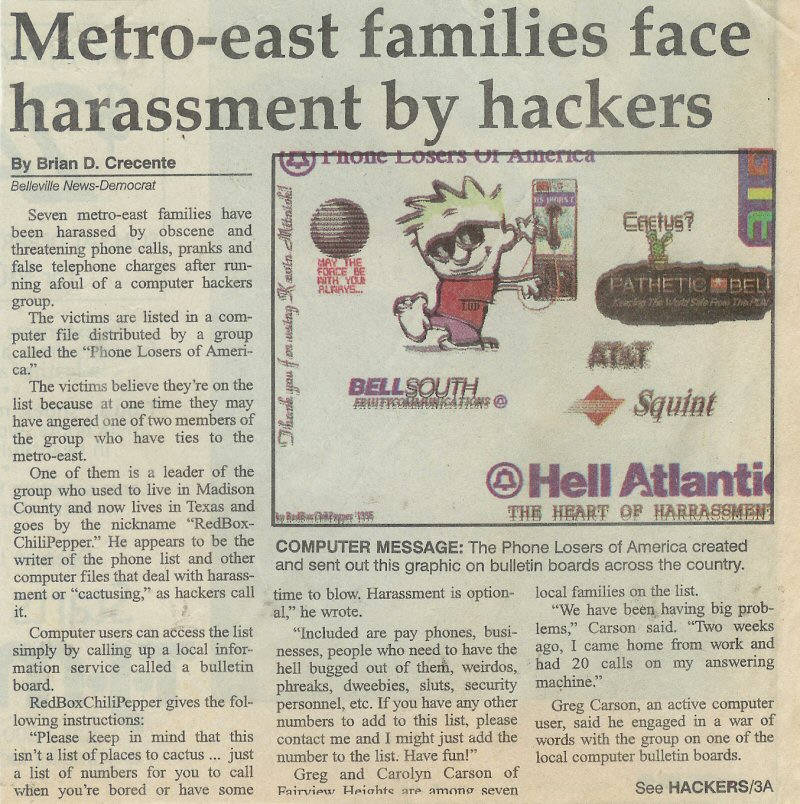 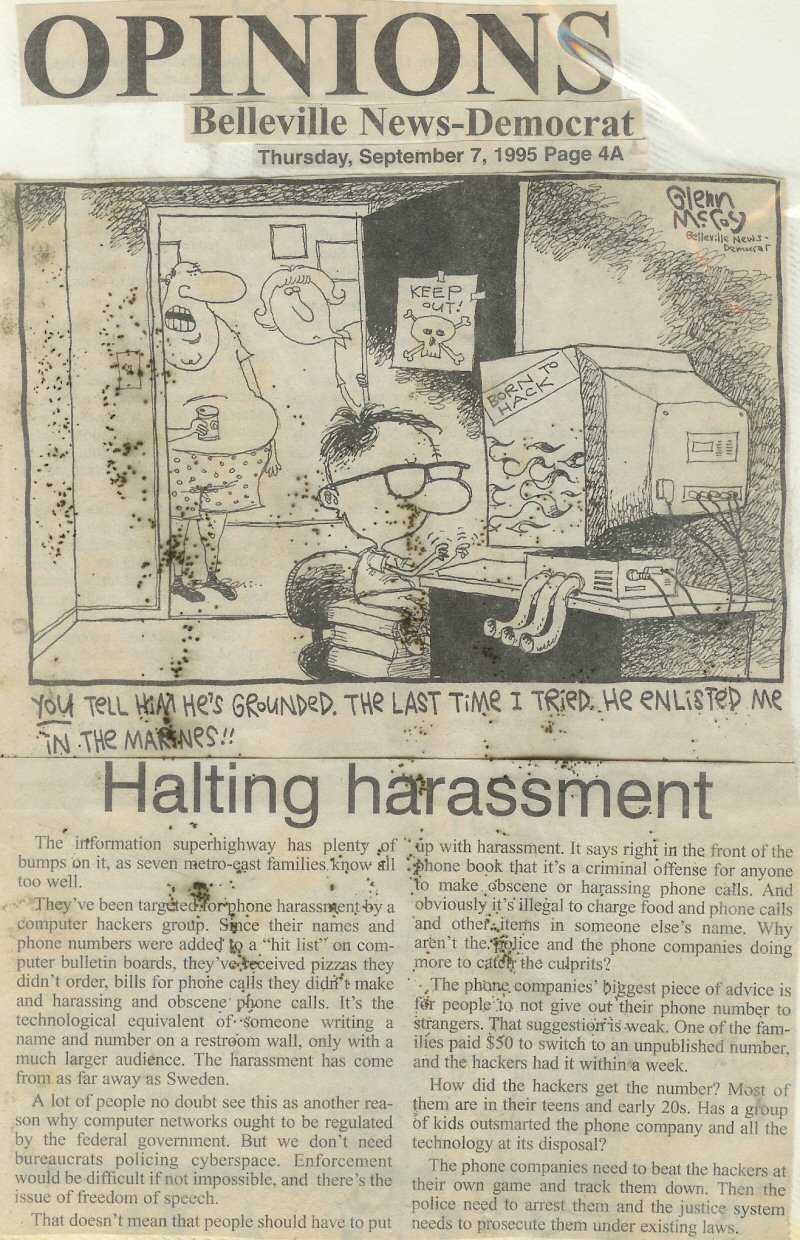 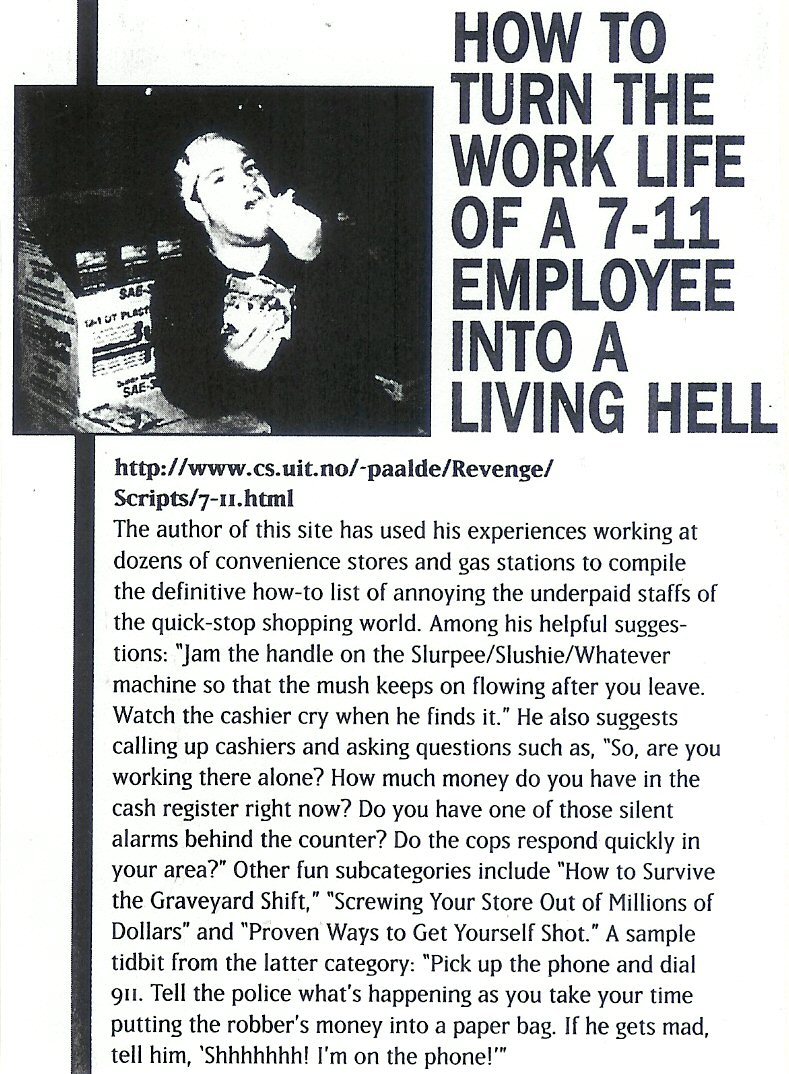 The Fine Art of Pranking 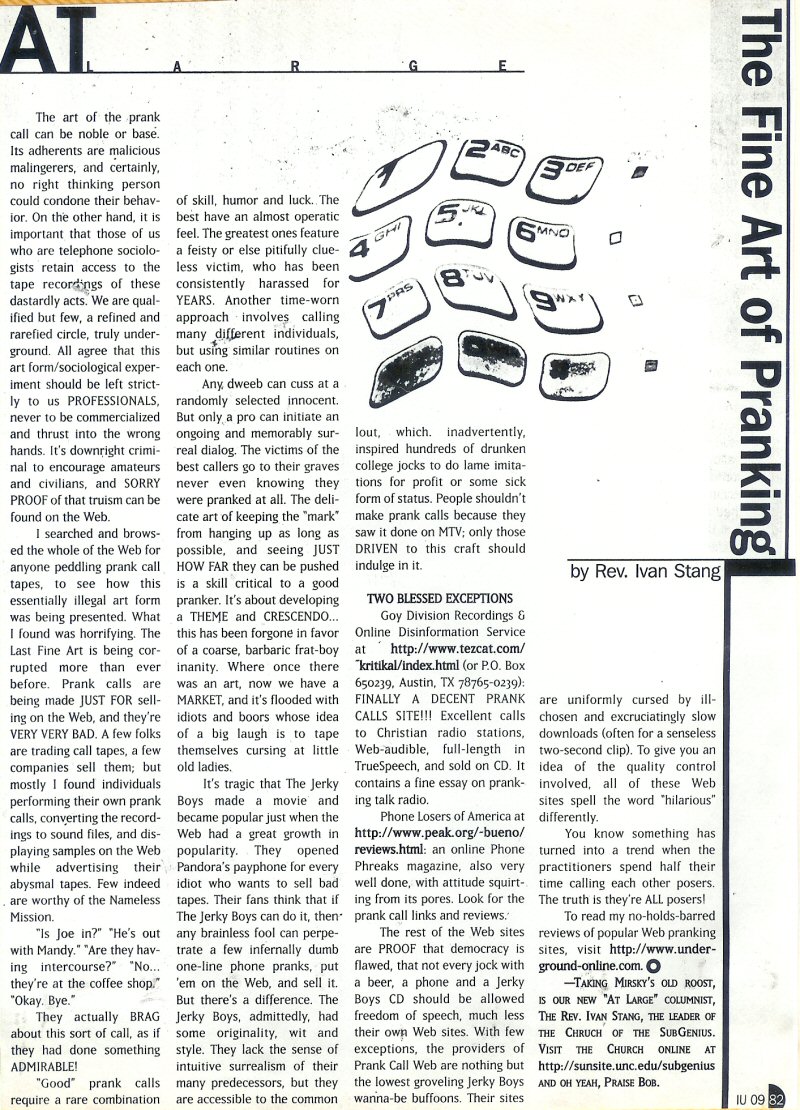 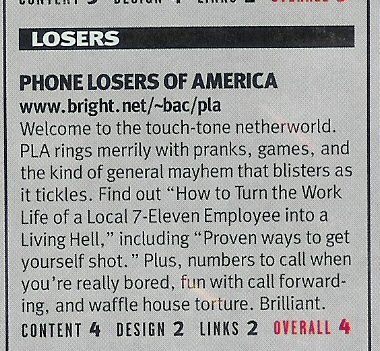 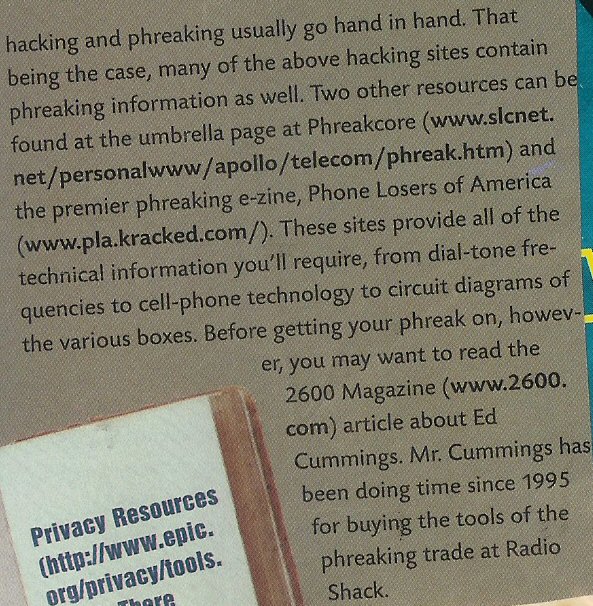 08/14/05 – mikey from alton illinois: makes me feel good that you guys are from this area

07/19/05 – bc from Granite City, IL: I remeber reading the belleville articles when I was younger…

03/19/05 – some guy from the internet: harrassment or “cactusing” as hackers call it…lmfao, ignorant fools

01/18/04 – Phelix the Phreak from The Universe: Quite entertaining…Continue to give them hell!