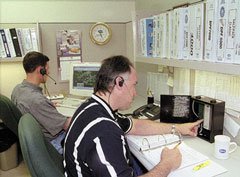 Have you ever called up a tech support hotline and been really rude to the person you reached, as if if were their fault that you don’t even know how to configure your internet settings correctly? Ever wonder what it would be like if the tables were turned? What if the tech acted like a total moron at you instead as you were left speechless? Below you’ll find our personal collection of technical support phone calls. These are all real calls and we were rude as hell to the customers for no apparent reason.

What kind of questions are these?? A technical support worker is baffled by the stupidity of an internet user’s questions and curses her ignorance. The user doesn’t seem to notice it and keeps asking questions.

S-H-I-T-H-E-A-D This lady needs to know what her User ID is and she’s a little surprised when see realizes what the tech had her write on a piece of paper.

Boner #1 Some old people call in about some internet problems and TS starts asking them about boners before he hangs up on them.

Throw It Out The Window This guy hates the internet because he doesn’t know how to use it.

Cactus? What are you trying to play? The TS worker says nothing but “cactus” and this guy wants to know what this cactus business is all about.

E-mail problems This tech support worker isn’t the greatest with her people skills.

The server is not connecting This lady explains her problem and after the tech support guy cracks a little joke both him and the customer laugh hysterically as he hangs up on her.

Password Hacker It’s just too easy to social engineer passwords out of some users.

Have A Groovy Day Faithful tech support worker Colleen tells a customer to just chuck it all when he tells her he’s out of hard drive space. He doesn’t seem to think this is a good idea but reluctantly agrees.

I can’t believe you fell for that A technical support worker pretends that he’s an automated phone system and prompts the user to press buttons and responds in vulgar language that really pisses off the customer. Some people just can’t take a joke.

No You Didn’t A girl calls in to describe her computer problems but the tech support worker refuses to believe a word she says. When she calls him rude he doesn’t believe that either.

$18 Fuse: A lady calls to ask about a charge on her internet account and is surprised at the answer she gets. This clip has a sequel – be sure to listen to the clip below called “nooner.”

Nooner: This is the sequel to the “$18.00 Fuse” clip above. After Mrs. Anus calls back, EvilCal goes into more detail about what a nooner is.

Harder and Longer: Once again pretending to be an automated phone system, a tech support worker confuses an internet user until they hang up.

I don’t have a gerbil: This guy is a little surprised when he reaches Roy’s Technical Support & Gerbil Grooming and probably a little upset when he finds out that he has to own a gerbil to get technical support. (As heard on TechTV!)

We’re Crazy With The Love: A happy-go-lucky tech support lady is just a little TOO happy for this internet user.

You’re Dialing The Wrong Modem Number: A user calls in to complain that they can’t connect and after a tech support girl gives them the correct number to call in on, the user laughs and hangs up on her. How rude.

You Can Eat It: This is a “tough guy” customer who wants to call in and be an asshole to whoever he talks to. His wants support and respect but he wasn’t prepared for us.

Script Terminals: This guy doesn’t think that tech support worker Roy is very sexy and ends up hanging up on him.

Cactus Wont Help MeThis is a really long call – a girl calls in about internet problems and all TS replies with is “cactus” which is confusing for her.

Boner #2 The same old people call back and they have no clue what a boner is.

Boner #3 And one last time. The old lady concludes that the lines must be messed up.

Cactus – Is This A Business? Another lady just doesn’t understand the whole cactus thing.

The user is broken A guy calls in with a problem and it’s obvious to the TS guy what the problem really is.

No Teacher Discounts This guy isn’t very happy that we’re not discounting his wife anymore because she’s a teacher.

Enter Your Password This TS guy is very helpful about the user’s problem.

Technical Support This guy is having trouble hearing us.

Whore Having Problems This lady is trying to install the internet and can’t quite figure it out.