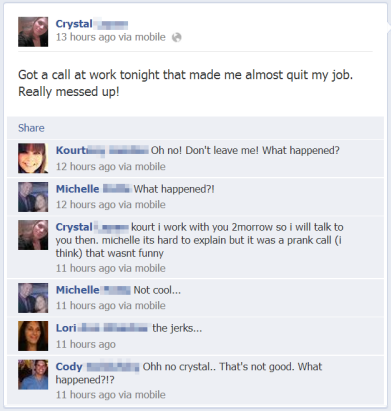 I did another preshow on Saturday night, once again for Brent Westwood’s show. This one drags on for a little over 2 hours and includes calls to video store customers, pizza survey calls and I bust a girl for smoking weed at her job, which is what the image above is referring to. Near the end there’s a 2 hour break where Brent Westwood’s show happened, but there’s no indication of WHERE it happened, so you just hear me saying goodbye and then there’s a bunch of pranks right after that. So if you’re a little confused, that’s why. Enjoy the show!

In case anyone missed the announcement, Madhouse Live has moved to Sunday nights!

As I mentioned in the previous post, you can now listen to PLA’s audio content on Tunein, iTunes and Stitcher! Leave a comment if you’d like to see us on any other similar services.

There’s a new prank show on Friday nights! Join Tux, Polkja and IceGoose at 7pm Pacific / 10pm Eastern for Friday Nights by the Fire. Click on that link to visit their Facebook page and pretend that you like them.