Years ago, Altalp from the PLA Forums made a bizarre post about buying a Vonage router from her local Wal-Mart, replacing the circuit board inside with a turkey sandwich and then returning it to Wal-Mart for a full refund. She posted a bunch of pictures with her story, demonstrating all the steps she took to ensure that nothing would seem amiss when she returned a turkey sandwich for a refund. 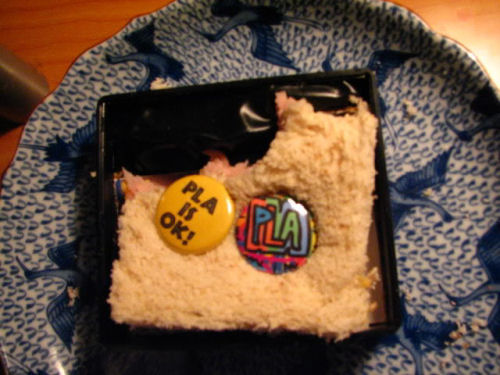 “I needed something lightweight and wouldnt rattle around inside if inspected. I couldnt find anything that would work. Either things were too heavy, not large enough, or too tall. I then noticed my turkey sammich sitting next to me. I picked it up and weighed it in my hand. It was just right. I placed the case over my sammich and cut out the outline in it. Then took a couple bites to make room for the jacks.”

Altalp had no problems returning the device and even made $20 extra by filling out the rebate card. I’m not trying to encourage people to do this sort of thing, of course, because it’s a pretty horrible thing to do. But the idea of replacing a Vonage router with a turkey sandwich sounded exactly like the sort of random comment Zak would make, like the time he claimed to an operator that a vandal had replaced his telephone handset with a bologna sandwich, only Altalp actually did it!

One thought on “Vonage Sammich mmmm!”