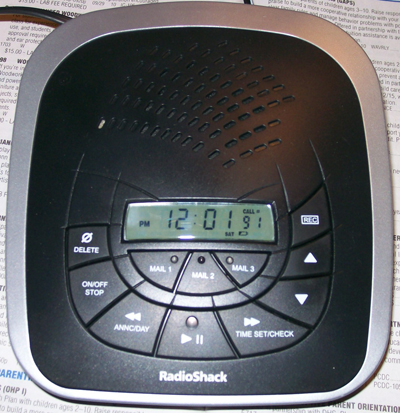 This week I was at Goodwill and picked up an old answering machine, just for the hell of it. When I got home, I made PLA book. I expected the machine to get hacked by morning, but it’s been several days now and still nobody has managed to hack it, despite receiving over 500 calls to it so far. What the hell, people?

So now I’m posting about it on here, in hopes that more people will try and it’ll get done before next week, because that’s when I’ll be boxing up the answering machine and returning it to Goodwill to exchange it for another machine that I will also hook up to a phone line and challenge people to hack. Goodwill has a nice selection of old answering machines, all priced under $5.00, so my plan is to keep doing this until the book comes out. After each machine is hacked, I’ll get a new one and you can try again. Maybe I’ll find some cool cassette tape machines for you to play with.

So give it a try. The phone number is 213-787-5552. The current machine on my phone line is a Radio Shack model 43-3829. To let me know that the machine has been hacked, you have to change the outgoing message on it, then immediately email me to let me know exactly how you did it. Hopefully I’ll be able to confirm that you really hacked it before someone else comes along and changes the message again.

If you’re too lazy to hack my answering machine, you can always preorder the book instead.