On last night’s Phone Show Legend called in and told us about his mid-80’s prank on a Florida church school. Legend called the school and claimed to be from NASA in Houston and said their school had been randomly selected to talk with Commander Crippen from the Discovery space shuttle which was currently orbiting the Earth at 17,400 miles per hour. Of course the school bought it and assembled all of the students together to let some of them talk to a real astronaut in space.

To add to the authenticity (and hilarity) Legend had his Commodore 64 computer set up to make all kinds of “space noises” in the background, such as beeping and static. For 2 full hours Legend kept teachers and students on the phone, answering questions such as, “What would happen if an astronaut sneezed?”

“It would propel you against the wall,” Legend replies. He also claimed that they were fixing satellites and all kinds of other nonsense.

Legend says he was 16 at the time and bored as hell. One thing lead to another and the next thing he knows he’s wasted 2 hours of the church school’s valuable time. After 2 hours his ADD started kicking in so he hung up. It was around that time that the school discovered they had been pranked.

Legend has been a member of the various PLA communities for most of this decade and you can often find him hanging out on the PLA Voice Bridge. He even helped RBCP stalk that wacky morning DJ from PLA Radio Episode #14. Legend’s NASA prank could be one of the world’s first large-scale pranks by phone. Have you ever heard of any pranks this awesome happening before the mid-80’s? Tell us about it in the comments section below. It’s just too bad none of it was recorded by Legend or by the school.

To listen to our interview with Legend, visit www.phonelosers.org/phoneshow. The full newspaper article of the incident is below. 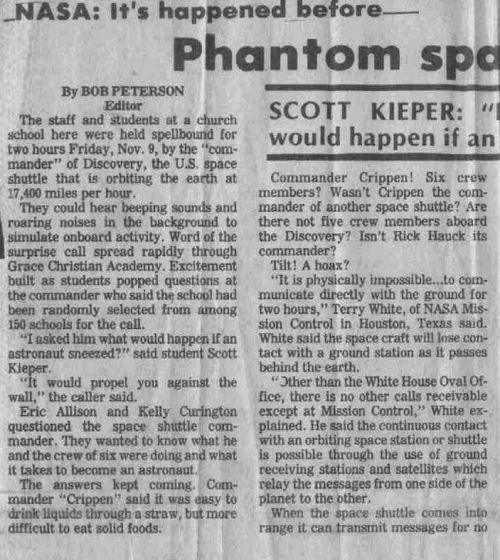 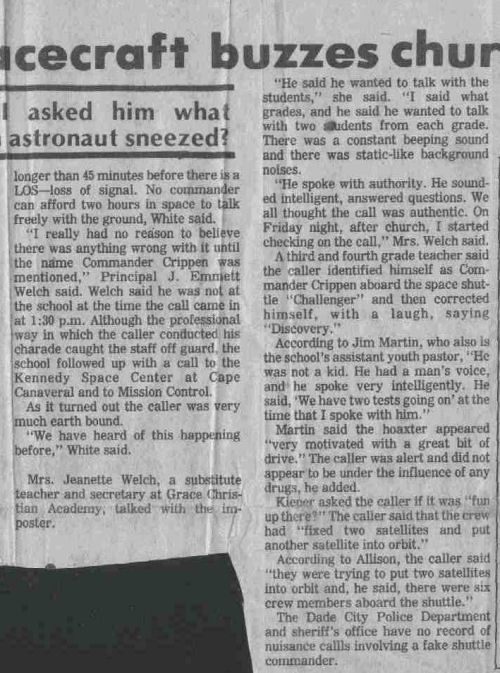