Once there was a conversation on Cal’s forum about unsecured cameras on the internet. The opentopia.com site was mentioned and we used it to find this live webcam at a bar in North Carolina called Jackalope Jacks. It showed this picture: 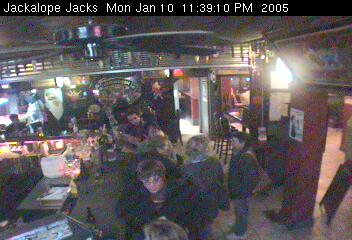 This seemed like the perfect opportunity for some live interactive prank calling. So I called up the bar, talked to the bartender and asked him to go get the guy that was sitting at the bar and put him on the phone. A few seconds later I got to witness the bartender walk up to this guy and tell him he’s got a phone call…

So the guy comes on the phone and I learn that his name is Dean and the girl’s name is Penny. The conversation doesn’t really go anywhere and Dean ends up hanging up on me. A minute later, Dean is back at the bar, talking to the girl who we now know as Penny. He clearly seems in much better spirits now, as he tells her about the bizarre phone call that he just received.

Listen to Dean hang up on me

So I call the bar back and talk to the same bartender again, explaining that he made a mistake and that I actually wanted to talk to the girl at the bar whose name is Penny. He puts me on hold and goes to get her.

Once again Ben the bartender retrieves a customer for me

After nearly two minutes of talking to Penny and telling her that I don’t want her hanging around Dean anymore because he’s a bad influence, she finally hangs up and comes back to the bar.

Penny tells me how creepy I am

Dean and Penny resume their conversation, both weirded out about the strange phone calls from the guy that seems to know who they are.

Ben the bartender doesn’t know me

During all of their conversation, I’m desperately trying to think up new ways to ruin their night further, eventually deciding that the obvious thing is to send pizzas to them at the bar. I call up a few pizza places and order the pizzas, one to Dean and the other for Penny. Then I sit back, watch the camera and giggle in anticipation of the pizza guys showing up at the bar to ask for them by name. To relieve my boredom, I call up the bartender to let him know that I’ve been watching them on their camera. The end of this call is cut off, as you can hear. Right around this time is when Dean and Penny completely ruin my prank by leaving the bar! The nerve of them… 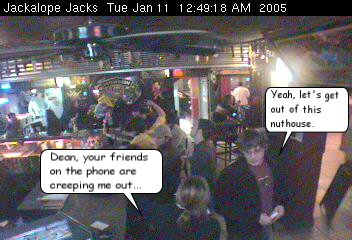 Then, not 2 minutes later, the pizza guy shows up and asks for Dean.

After that pizza guy leaves, Ben the bartender stands and scowls at the camera while thinking evil thoughts. He only has a minute to do this, though, because then the second pizza guy shows up.

And that’s my adventure with Jackalope Jacks live webcam. I know, not the best prank ever, but it’s mildly amusing and it combines the age old art of prank calling with the new fun of unsecured web cams on the net! Hope you enjoyed it…