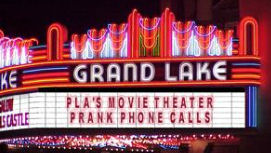 Let me talk to the manager This lady demands to speak to the manager. She doesn’t win. This is the same nosy bitch that was eavesdropping on our conversation earlier.

Cabin By The Lake This girl calls in about some movie times and then tries to get murd0c in trouble when she thinks she’s talking to a manager.

Over Seventeen? This girl calls in and CLAIMS she’s 58 years old, trying to get into an R rated movie.

Fuck the Internet RBCP suggests alternatives to calling the recording line and this guy doesn’t care about alternatives.

I’m Lying The same guy calls back trying to get movie times again. As usual, he thanks RBCP and hangs up.

Discipline an employee This lady tries to trick us into getting a responsible person by asking for the marketing department. It doesn’t work but she seems to think it does and tells us about the horrible hooligans answering the phones today.

No Spy Kids This guy doesn’t realize that Spy Kids is no longer playing so we nicely suggest an alternative movie for him.

Rotary Dial Phone This lady’s mind is in the gutter when RBCP makes a reference to rotary dial phones. Then she theatens to have her boyfriend kick his ass.

Bell Repair Bell Repair calls in trying to figure out what the problem is with the phones. She doesn’t get very far with us. Her favorite phrase is “crossed up.”

Second Hand Something This lady cops an attitude with us just because we’re not carrying the movie she wants to see.

Say Please This guy calls murd0c ignorant, says fuck you and hangs up on us. Guess he didn’t want those show times so bad after all.

Automated Phone System< This is just us testing out our new automated system, designed to harass customers when we’re not around to answer the calls ourselves.

Teeny boppers tricking us A couple of girls call the recording line wanting to chat. But since they’re on the line, we can’t answer the phone for other customers. RBCP asks for their phone number and they give him 911, thinking he wouldn’t actually call it. Hearing 911 get on the phone spooks them enough to make them hang up.

Telephone Operator We’re guessing this was a theater employee trying to pretend to be a phone operator.

Hacking A Theater Murd0c & RBCP call up a movie theater and talk them out of their movie line’s model number and access code. By looking up the answering machine’s user manual on the web, they learn how to change the outgoing message that movie patrons hear when they call the line.