Using a Radio Shack Tone Dialer is by far the most popular method of building a red box in the 90's. There are several different variations of the tone dialer red box, all of which will be explained below.

Many people ask me what the legitimate use of a tone dialer is. Tone dialers are used to access touch tone voicemails and voice menus when you're calling from a rotary dial phone. Even though rotary dial phones are very close to obsolete now, tone dialers still come in handy to store commonly dialed phone numbers in. They can also be useful to a phreak when a phone disables it's keypad or has a lock on it to prevent long distance dialing.

The biggest problem I've run into while explaining this method is the different variations of tone dialers themselves. See, Radio Shack knows that certain people buy these tone dialers for the sole purpose of screwing the phone company. They've come out with two new models of the "33 Memory Pocket Tone Dialer" in just the last decade. 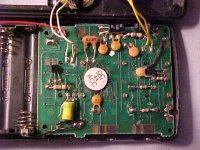 But in the last year or so (1996-1997), they'd upgraded once again, this time to stop us evil phreaks from modifying it for illegal use. Personally, I've never encountered one of these new models so I can't really tell too much about it except for what I've heard. Supposedly, the crystal still exists but they've disguised it as a capacitor. I've heard a dozen different stories about the placement of this new capacitor so I can only say that most people have told me it's in the same place as the old crystal always was and it has Z3.58M written on it. The picture here attempts to show you a real picture of the circuit board and the new crystal, although it's hard to see. Click on the picture for an enlarged view or click here for an extreme closeup view. (big thanks to dominicky for these new pictures!)

43-145 This is a cheap tone dialer with no memory presets on it. These dialers cost $16.99 and can be modified, but without the memory presets you won't be able to make quarter tones, just nickels which can be a little time-consuming. But if you want to save a lousy 10 bucks, this is the way to go.

43-141 This is the original 33 memory pocket tone dialer. This model was brown and very ugly-70's looking compared to the newer models. This one will work for red boxing just as good as the new ones. Radio Shack stopped making this model in 1994.

43-146 This is the current 33 memory tone dialer which sells for $24.99. Both the newest "hack-proof" model and the 1995- model share the same catalog number, contrary to popular belief. The crystal in this model has been disguised to trick people into thinking that you can no longer use it for illegal purposes.

These is the original plans for building a red box as described in 2600 magazine by Noah Clayton. This section is taken from PLA's issue 02.