Recently I was going through a closet and found my old notebook full of unpaid phone bills. This is a thick folder, containing thousands of dollars in fraudulent phone charges that, for some reason, I thought would be a good idea to keep sitting around my house for nearly a decade. I’ve decided that it’s time for this notebook to be thrown away before the bills are somehow used against me in a court of law. But first, I’m going to scan all the totals in and post them on this page to gloat about.

Some of these bills were in my name and some in other peoples’ names. It’s obvious that I was trying to compensate for other inadequacies by having the largest phone bills possible. Keep in mind that these bill were never paid, so don’t yell at me in the comments area about throwing my money away on frivolous things when other people are starving.

Also keep in mind that the original bills from this page were from the early-to-mid 1990’s, when there was no such thing as unlimited long distance, free nights and weekends, and nobody had the internet yet. Enjoy this glimpse of what phone bills looked like in the mid 1990’s since so much has changed with phone companies since then. And if you’ve got a huge phone bill that you’d like to see on this page, contact us or talk about it in the comments section on the bottom of the page.

This first one is a bill that’s actually under my own name. It’s from when I lived in Texas in 1995 and the PLA was just starting to get noticed. Throughout the bill there were lots of 900 number charges (from failed attempts at scamming free 900 number calls via call forwarding), lots of calls to el_jefe, Greg Carson’s home and work, EvilCal, the Defcon Voice Bridge, random numbers in Roy, New Mexico from that one PLA issue, and lots of emergency operator interrupting. 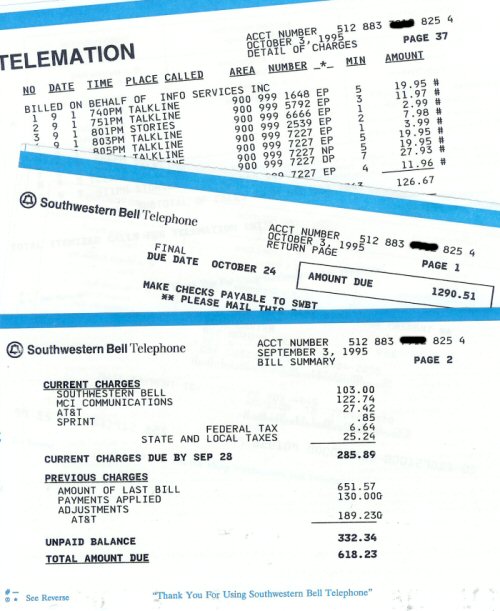 Below is one from a hotel I lived at in Portland, Oregon in 1994. They had the nerve to charge 25 cents for local and toll-free calls. But I put my calls to good use by dialing 1-800-CALL-ATT a lot and then dialing multiple free numbers from there.

A friend of mine in Austraila ran up a pretty good sized phone bill in 1994. I asked her if she would mail it to me so I could add it to my collection. She did a lot of calling to the States, some of it to me. 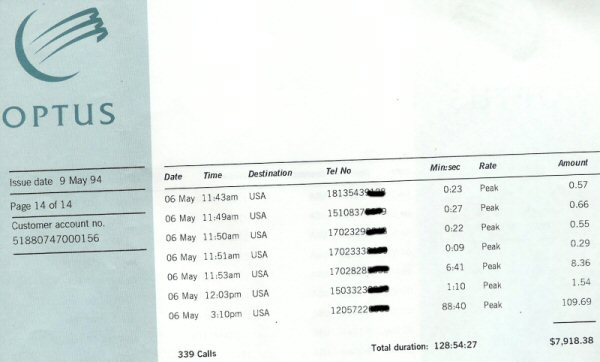 This next one isn’t a very impressive amount but I’m putting it in here because it’s Nynex and Nynex was a cool name for a phone company. It’s from when I ordered a calling card for somebody and forwarded their bills to my PO Box so I could get the calling card. 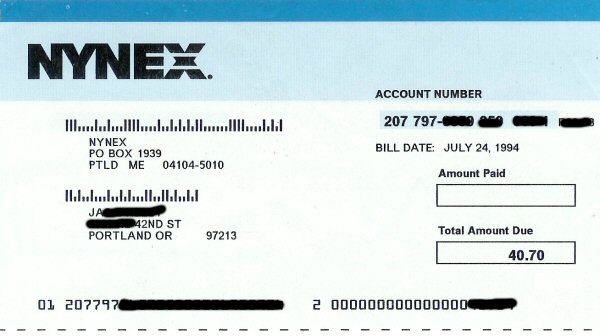 The total on the bill below was actually $15,599.29 but I don’t have the final page for this one anymore. It took 3 months of 900 numbers, Alliance teleconferences, emergency interrupting and letting friends 3rd party bill calls to my number to achieve this amount. After losing my phone service, GTE investigators started calling some of the people I talked to a lot and telling them that I would probably go to prison for ripping them off for such a huge amount. I ended up moving soon after hearing this to avoid the feds who I were sure would crash down my door any day. 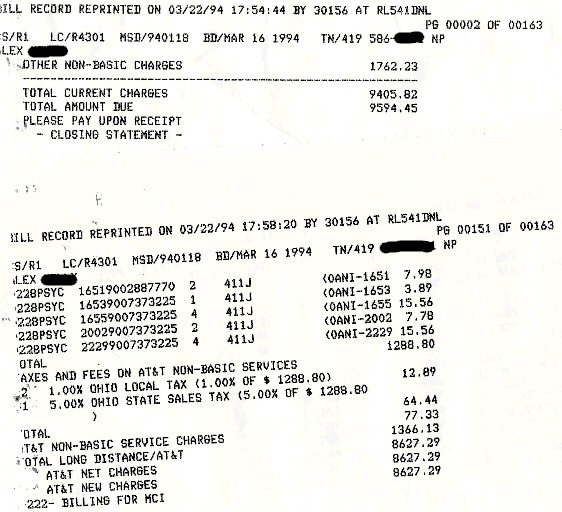 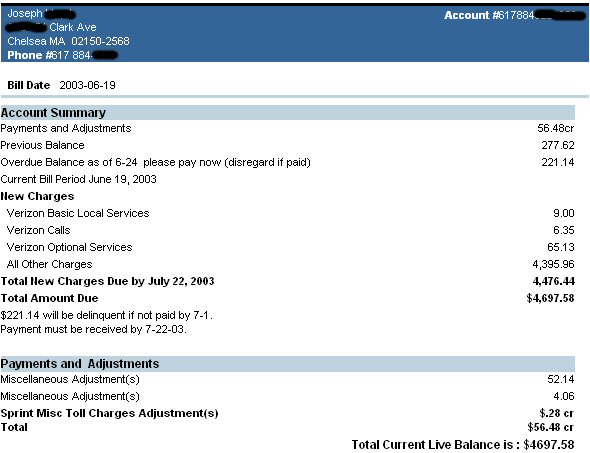 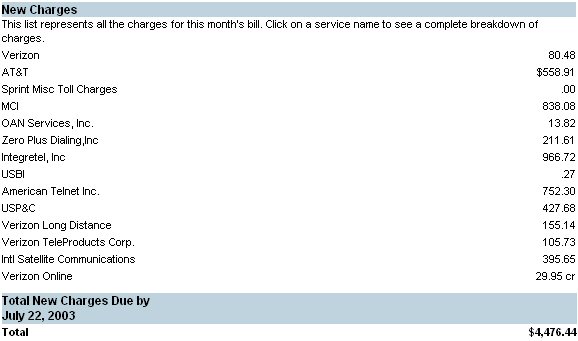 The following bill was submitted anonymously and not only shows a very impressive amount of $7,553.83 due, but a $49,803.96 credit from a previous $50,654.34 balance. The submitter didn’t give us any insight on how their bill achieved these high numbers. Click on the bill for a larger view. 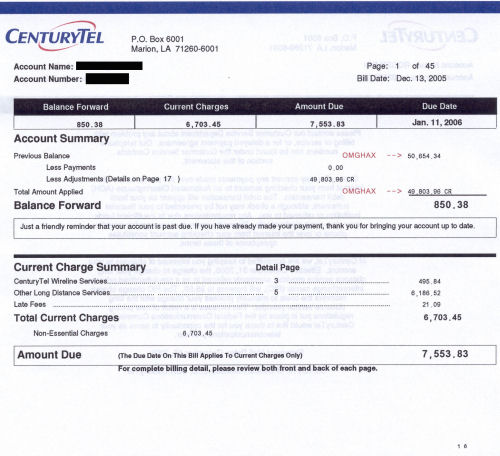 02/07/06 – jamie from florida: phone bills are getting to high they should lower the price so more people can afford them

06/22/05 – julian from queensland: my phone bills are this big everymonth because im a little rich boi who sits on his ass ringin mobiles all day

05/16/05 – mr get real from uk london: well $15000 bill all the phone companys ure insured for this crap so whast the point and i hope thay dont have agent’s to trace you LOL !!! ONE DAY YOU HAVE SOME ONE KNOCKING ON YOUR DOOR

05/02/05 – Andrew Gooden from Jamaica WI: I am seeking a software that can be used to controll my telephone usage in order to reduce my bill or make free usage of my dial up internet connection without such big bills to be paid.

02/07/05 – Ma Bell from End of The Line: You think you are so clever, but you left your name on one of those accounts. We’re gonna get you now Mr Bill Summary! Oh Yeah!

02/04/05 – Big Daddy from TN: Fuck all you people putting the guys down there brilliant keep work!

12/16/04 – Digital Overlord from Texas: ahhhh….. well the phone company didn’t lose any fucking money. They’ve had all their equipment/lines etc paid off for 50 years or more by now so everything is profit for them. The guy didn’t run up any amount on his own bill you doufuses, he took over other lines…

01/25/04 – Bill from Washington DC: Dude, if you’re going to throw money away, I’ll gladly give you my address so I can put it to better use.

01/22/04 – roseberri from SC: Ha! I have better things to do with my money than up my bills to those amounts. Thats crazy!

01/21/04 – Madhatter from Oakdale, PA: Well Paul I do believe that the intrnet was around back then, just not the internet as we know it now. There has been chats forum around for many years

01/21/04 – paul from mn: madhatter, try looking at the dates on those bills. most of them are from the early 90’s. don’t think there was any internet available back then.

01/21/04 – Madhatter from Oakdale, PA: Very Very interesting that people can talk that much on the phone when they can use the internet for free