Sometimes when some crazy community project needs major funding, they’ll ask people to buy bricks will go into the ground around said project and presumably stay there forever. That’s the case with the Albany Brass Ring, a project in Albany, Oregon that is in the process of creating a giant merry-go-round on a downtown city block. For a mere $100, you can buy your own brick and imprint it with anything you want. Something such as “Phone Losers of America,” for example.

Okay, so we did it! Thanks, everyone who donated! Now we just have to wait 5 years to actually see our brick. RBCP will probably die in a tragic boating accident before that happens, so someone come to Albany and take pics, okay? Our next goal is to buy a second brick and write something completely retarded on it. So you can still donate to the brick project! Any money donated will go towards the newer, more retarded brick. Donate and help us get a retarded brick today! 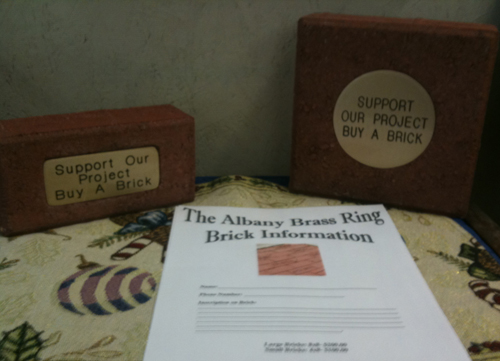 The larger brick is 8×8 and costs $200. The smaller brick is 4×8 and costs $100. We’re going to buy the smaller one, mostly because it seems more likely that we’ll raise $100 through donations easier than $200, but also because it looks like you get more writing space on the smaller brick. I haven’t inquired into the exact number of characters per line, but I’m sure it’s enough to write Phone Losers of America” on, maybe with a “Cactus cactus!” underneath it. 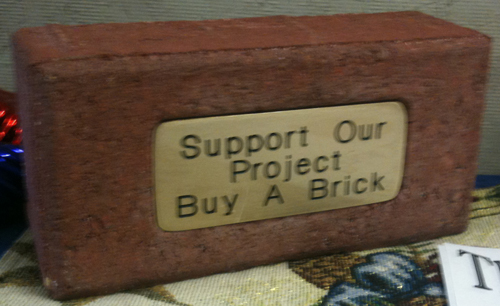 The users on the PLA Forums came up with a lot of wacky things we could write on bricks, such as “The brick 3 feet to your left is a fake.” and “This carousel is property of the PLA” and “Your ad here. Call 413-351-0111,” but for the first brick we pay for, it’s going to simply state “Phone Losers of America” with maybe something written underneath it. If you people will continue to donate beyond the initial $100 for the PLA brick, then we can start requesting crazy stuff on bricks and see how much they’ll let us get away with. That means you want to donate money to this project. Click the button below to donate:

What do you get for donating? Nothing more than your name mentioned on this page. I will list the names (or alias) of the people donating, the amount they donated, and a line or two of text that you choose, such as an inspirational quote or Chris Tomkinson’s social security number or your favorite song lyric by Bonnie Tyler. I reserve the right to reject anything you ask to write on this page. Your name and quote will remain here forever. For all eternity. Never to be taken down ever.

When will the brick be put down? They’re currently estimating that the project will be finished within 5 to 6 years, which means probably 2016 or 2017. Yes, that’s a long time for us to wait to see our brick, but it’s so worth it to know that every time you happen to pass through Albany, Oregon you can stop by and see the brick that you paid for 1/20th of. Because you pass through Albany so often.

Where will this brick be located? In the ground, duh. It’ll be among hundreds of other bricks surrounding the Brass Ring Carousel that nobody will ever bother to look down and read other than the people who paid for a brick and are looking all over the place for theirs. The address is 503 1st Ave W, Albany, Oregon 97321 (one block over from the Back chapter in the PLA Book), and the building is open to the public to see how the project is coming along. Their website has a photo gallery of some of the construction.

So that’s it. Donate some money by clicking the button below. Donate $5, $10, $20, or whatever amount you want. If you donate less than $5, people will look at this page and see what a cheapskate you are for all eternity. If donations go over $100, we’ll either apply that towards brick #2 (if that seems likely to happen) or we’ll refund the extra donations.

2 thoughts on “Our Brick”