Department Store Phones. They’re everywhere. Well, okay, not everywhere but they’re in department stores, right? Like K-Mart, Target, Wal-Mart, Fred Meyer, etc. These phones can provide an individual with hours upon hours of good clean-cut entertainment if you know how to use them. You can talk to different departments in the store, you can dial out of the store and you can even yell anything you want over the intercom. Next time you’re in a store, find yourself a phone in a secluded isle and prepare to have lots of fun with it.

In some stores, such as Target, they encourage their guests to use the courtesy phones so you don’t even have to hide yourself so well. But in just about any other store, store phones are never meant for customer use. Most employees that see someone using their phones will think nothing of it, but other employees like to pretend that they’re important and will ask you what the hell you’re doing. The correct response is a swift kick in the employees groin.

In most stores, the “all store page” button is marked clearly on the phone because store managers know that nobody in their right mind would pick up a store phone and say anything rude for the whole store to hear. Or would they? This is actually a useful thing to know because if you’re with a friend and you get separated, you just pick up a store phone, hit “PAGE” and tell your friend to get his ass to the department that you’re in.

But even more importantly, you can say anything you want to the entire store. From making up your own in-store specials to reading poetry, the audience of the entire store is at your mercy. And guess what happens when the employee or manager finally catches you? They tell you to cut it out. Especially if you’re bigger than them, which I usually am. At the very worst, you’ll be asked to leave the store. Which really isn’t that terrible of a punishment, is it?

In the mid-90’s, we even figured out how to get on the overhead paging system from our house at Fred Meyer. We simply called the store and asked them to transfer us to the extension for paging. Once we were on, they couldn’t seem to kick us off and we remained on their intercom for hours at a time. Keep in mind, we were miles away from the store so it was impossible for them to know who was responsible. You can read the details of our remote hijacking by clicking here.

If you hang out in a store long enough, you’ll hear a voice overhead asking certain departments to pick up certain lines for customers. Such as “Housewares, you have a call on 230.” Whenever you hear this, you should immediately race to the nearest phone and dial the extension that was announced. Usually it’s not too hard to pick up a line before an employee gets to it. Once your connected, the customer on the other end thinks that you’re an employee. Using your best employee voice, say something like, “This is Jake from Housewares, can I help you?” If you’re unsure which department they’re on hold for, pick up and say, “Which department are you holding for? Hardware? Well that’s me! What can I do for you?” But that should be the extent of your friendliness. Use the conversations below to help guide you in the art of customer service…

Me: Who are you holding for?
XX: Electronics.
Me: Oh, that’s me. What do you need?
XX: I just need to see if my film is ready. The last name is-
Me: Uh, listen, I’m really swamped back here right now so you’re just going to have to wait. Can I put you on hold for about 20 minutes?
XX: Welllll, I could just call back I suppose.
Me: (acting pissed) Well, you don’t have to be a fucking smartass about it. All I said was that I’m in the middle of playing Super Mario Kart and I don’t have time to walk across the fucking counter and check on your film so just deal with it, you stupid bitch. Okay? (slam down the phone.)

An interesting phenomenon here is that as soon as you hang up, about two seconds later another line will light up… Weird. So you pick up the phone.

Me: (in a different voice) K-Mart, this is Big Bob.
XX: (very irritated) Yes, I just called Electronics at your store there and the boy who answered the phone was extrememly rude to me and I’d like to talk to the manager there.
Me: Well, I’m Bob the assistant manager. The real manager is asleep right now. Would you like me to go to his office and wake him up?
XX: Well, I think somebody needs to talk to the person in electronics. I asked if my film was there and he started screaming at me and using foul language.
Me: Ma’am, that’s just the way our employees are. In order to cut down on stress in the workplace, we encourage them to relieve their frustrations on the customers. If you don’t like it, you can take your fucking film somewhere else. (slam)

The trick is never to let them have the last word. You’d probably have a good laugh now by going to the Service Desk or operator’s desk (aka fitting rooms) and listening to her call back and yell at the operator for a bit.

Me: Thanks for calling Wal-Mart, how can I help you?
XX: I need the toy department.
Me: Hold on… (different voice) …Toys.
XX: Do you guys carry the new Christmas Barbie?
Me: Which one? There’s two of them. One of them she’s got a Christmas wreath stuck up her butt and the other one she’s holding a penis in one hand and a whip in the other hand. Anyway, yeah, we got ’em both but they’re going quick. They’re both $17.99 apiece.
XX: Uhhhh…
Me: Would you like me to hold one for you? I can take your name and hold it for 24 hours.
XX: (click)
Me: How rude…

If you’d like to hear some actual calls of our customer service hijinks, visit our Fun at Wal-Mart page. You can listen to about a dozen sound clips of us being as rude as possible to customers.

If you have the time, you can sit at a store’s phone and manually scan for other “departments” that aren’t listed on the phone or even known to most employees and managers. In the past, I’ve found the extensions to different phones in store rooms and offices around the store, I’ve been magically transferred to other offices in different states (speed dial?) and I’ve gotten lots of weird sounding noises and computer carriers and fax tones. I’ve also been thrown out of alot of stores.

In some stores, the operator will notice that the phone you’re using keeps going on and off. This will either make her suspicious or drive her crazy and in both cases, she’ll send someone over to investigate. Really, though, the worst thing that could happen is that you’ll get kicked out of the store. Oh darn. But even that’s pretty unlikely. Just tell them you were trying to figure out how to get some help in that department, then ask if they have any Tickle Me Elmo dolls left.

In the mid-90’s, we figured out how to get on Fred Meyer’s overhead paging system from our home phone. We simply called the store and asked them to transfer us to the extension for paging. Once we were on, they couldn’t seem to kick us off and we remained on their intercom for hours at a time. Keep in mind, we were miles away from the store so it was impossible for them to know who was responsible. You can read the details of our remote hijacking by reading our Fred Meyer Hijacking page. 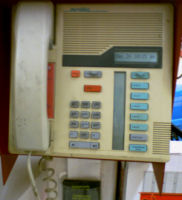 Matt from Canada says, “To page its (Feature button) 630, manager is 641, and that was about all the good ones the rest were to different phones which will vary. Usually start with 23x.”

More information coming on this one….