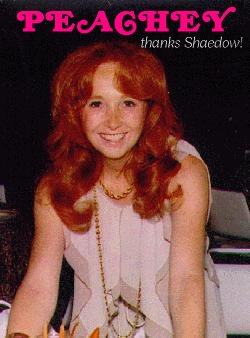 Peachey was an ordinary girl from Boston, Massachusetts who one day decided to come into efnet’s #rock and talk about rock music. This was her first mistake. As most people either know or find out the hard way, #rock was taken over a few years ago by a bunch of Phone Losers of America goons. #rock regulars began to insult her and msged her constantly for days after that. They also began to follow her all over IRC into every channel she went into, harassing the people & saying mean things about peachey until both them & peachey were kick-banned. If one person got kicked, though, another #rock goon would take their place and talk about peachey until she was either kicked or would leave in embarassment.

Finally someone chatted with her enough to convince her that they were a friend and peachey was dumb enough to give them her home phone number. Almost immediately her life was ruined. Mainly el_jefe, who has no life and a ton of spare time on his hands spent alot of time calling her and roying her to death. She claimed that he was calling at all hours of the day and night and that her parents were getting mad and yelling at her for getting calls so late. She said she couldn’t take the phone off the hook or turn off the ringer because her dad was a doctor and they needed the phone for emergencies.

This went on for way over a month and everytime we called, peachey would appear on IRC and beg everyone to quit. Since that didn’t seem to work, she’d resort to threatening random people out of #rock, saying she was going to “get them!” This didn’t settle well with the people in #rock. Everyone began msging her, pretending to be her friend or just plain harassing her and sometimes logging the fun. More and more people began to call her at home and peachey finally found a channel she could hang out in without being bothered too much – #depression.

Finally peachey (or her parents?) broke down and changed their phone number around the middle of May 1997. Since we didn’t have any other information on her other than her real first name, which was Ashley, finding her new number was sort of difficult. Then one day Spanish Prince went on IRC and changed his nick to “peachey” to see if he’d get msged. Apparently one of peachey’s legitimate friends thought that he was the real peachey and fired up a conversation with “her.”

In the end, Spanish Prince asked, “You have my new number, right?” and the friend replied, “Yes, 1081.” which gave us her new unlisted phone number! Anyway, this page holds all of the IRC logs regarding peachey. They were originally printed in a series of peachey text files which began circulation on May 27th, 1997 and continued for a couple of years.