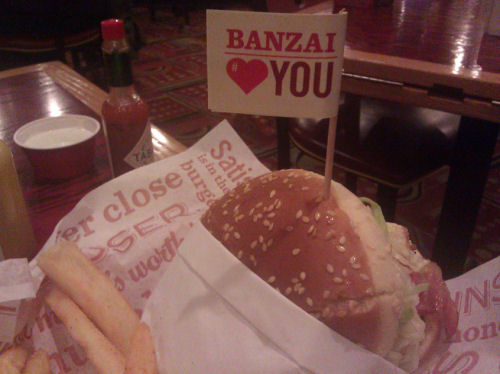 Earlier this week, I was having a nice romantic dinner with Rappy McRapperson at Red Robin, and we noticed an advertisement on the table encouraging everyone to tweet with the hashtag of #banzailoveyou to win free meals and other prizes. Rappy, who was clearly a victim of my bad influence over the past few days, immediately suggested that we tweet something horrible about Red Robin, using their hashtag. A few moments later, using all 3 of my Twitter accounts on my smartphone and then Rappy's, the following twats were posted. 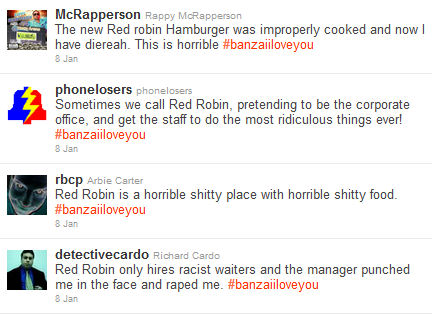 Now, I have nothing against Red Robin and I think their food is awesome. I eat there with my kids and my friends several times a year and have had nothing but great experiences there. So please, don't think that my tweets are out of retaliation for poor service or rude staff. Red Robin is a great place and I highly recommend them to everyone that reads this. I'm just an asshole, though, and I think the idea of writing horrible things about them is hilarious. So I started a thread on the PLA Forums, encouraging others to join in the fun and tweet crazy things.

You'll notice that these first few tweets have two i's in the hashtag. This apparently is incorrect, as you'll see on the official contest page, but I swear there were two i's on the card we saw on the table. I had to look at it each time I made a new tweet from the restaurant and there's just no way I made the exact same mistake all three times. Legitimate customers were tweeting with 2 i's too, so it's not just me. No really! 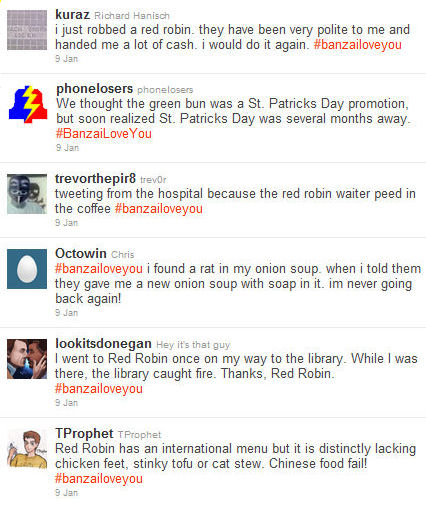 Right around here is when things got completely out of control. Our wacky tweets are now outnumbering the legitimate contest tweets. Prepare yourself for a gigantic list of hilarious tweets, all by people who noticed our tweets and began writing things 500 times more awesome than we could come up with. 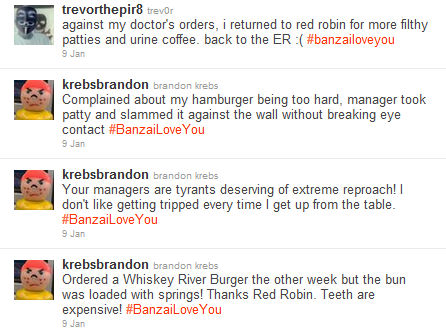 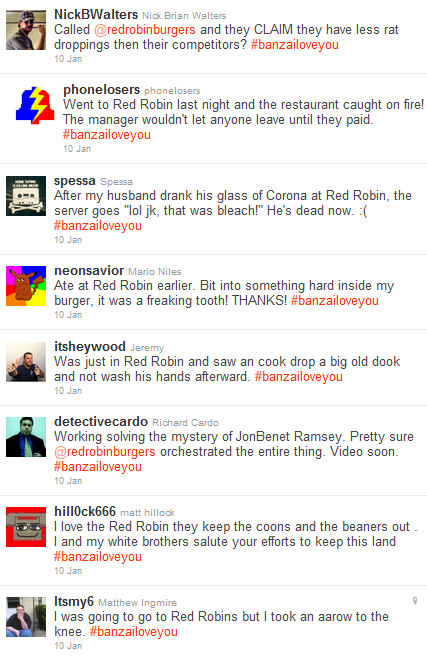 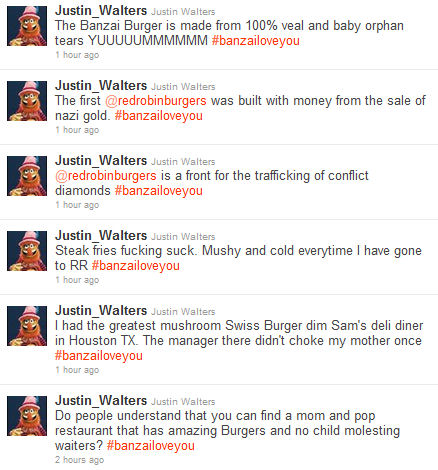 As all of these hilarious tweets were coming in yesterday, keeping me and Rappy LOLing most of the day, Carlito began messaging me from a Red Robin in Pennsylvania. He just happened to be eating there and managed to get an awesome picture of him and the Red Robin mascot. Then he sent me the picture of his Banzai burger, which you saw at the beginning of this post. 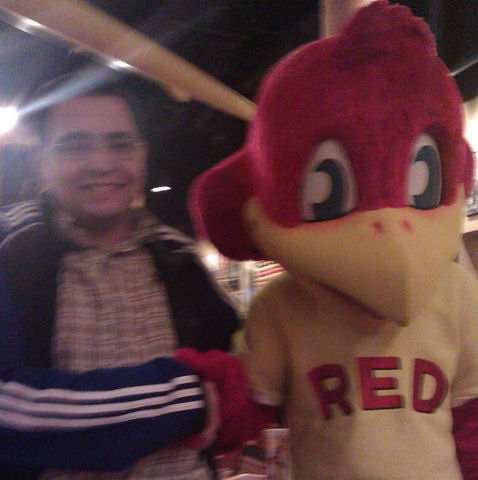 Having pictures coming in from Carlito as all of these tweets were happening just added to the hilarity for me and Rappy. The tweets are still continuing today and show no sign of slowing down yet. So a ton of thanks goes out to all the people who've given us nonstop lulz these past 48 hours.

I'm not going to say you all should continue doing this, but the contest does last for another month, until February 19th, and it sure is making a lot of people laugh. We're fairly certain that even the Red Robin corporate people are snickering about it in their corporate meetings (you guys are welcome for that!). If you'd like to enter Red Robin's contest, all you have to do is follow @redrobinburgers and then tweet something (the contest rules don't specify what should be tweeted) with the hashtag of #banzailoveyou. You can read all about the contest at redrobin.com/banzailoveyou.

Once again, RED ROBIN IS AWESOME! Don't believe any of the craziness that you've read above. Well, except for the part about the staff stealing my wallet and shooting my wife in the foot - that shit is totally true. If our silliness is making you laugh, though, then you should definitely go eat some overpriced food at the Red Robin nearest you.

Thanks to Rappy McRapperson for making this happen and to Carlito from Madhouse Live for the pictures. Most of all, thanks to all the Twitter users that have given me and us other PLA'ers lots of hysterical laughter these past 48 hours!

Below is a live Twitter feed of all current #banzailoveyou posts.

January 17th Update! Just a day after posting this entry on phonelosers.org, Red Robin suddenly began heavily promoting their Banzai Burger contest by emailing people on their mailing list and encouraging them to tweet with #banzailoveyou. They also began constantly tweeting, "Put your tweets where your mouth is. Head to Red Robin, enjoy a Banzai Burger & Tweet the love! #BanzaiLoveYou" to get people to respond with the hashtag. As a result, our crazy tweets have been quickly scrolling away for days now, making it pointless to even do it anymore. Well played, Red Robin. Well played.

Another odd thing - when we started doing this, the description on the Red Robin Twitter account had the name of the guy who ran it. As in, the personal name of the guy in their public relations department, or whoever runs it in corporate Red Robin Land. But as soon as they started fighting back at us, his name disappeared from the description. Now it just says "Official Home of Insanely Delicious Gourmet Burgers." We're not sure if taking the name off had anything to do with us, but we're going to pretend it did because we're such scary people and he just didn't want any trouble.