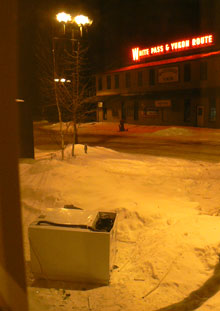 A story this week from CBC News shows that a prank caller convinced a hotel guest to hurl a television and a fridge out of his second story window. The guest was told he was talking to the front desk and that there was a gas leak. Throwing large items out the window, of course, would increase the flow of air into the room. It makes perfect sense.

After throwing a few things out his window, the caller was instructed to pull the hotel’s fire alarm, which he did. Because, you know, the front desk person can’t pull a fire alarm by themselves. They need the help of sleepy guests in the middle of the night.

“The poor guy in the room is, of course, feeling pretty bashful and somewhat stupid, but he’s not going to be held liable or anything,” David Goold, the hotel’s night attendant, told CBC News early Monday morning.

“He can’t really be blamed for what you’re doing, half-awake, under the front desk’s supposed instructions, which is who the people on the phone said they were.”

You heard it, folks, it’s okay to throw large items out of your hotel room window as long as you claim it was a prank caller that made you do it. The time to live like a rock star is now!

For those of you who listen to PLA Radio, you might recall episode #23 where we played the calls from a KFC hoax in which a prank caller convinced employees to set off fire extinguishers, strip completely nude outside, and pee on each other. According to the comments on CBC News, the same man is responsible for this prank call.

The most impressive part of all of this, though, is that Allison Devereaux, the writer of the article at CBC News, was able to use the word defenestrated in her story. According to dictionary.com, defenestrate is a verb meaning, “To throw out of a window.” Allison was finally able to mark this word off her long list of words that she really wants to use in an article someday. Congratulations, Allison!

While I can’t help but see the hilarity in both of these prank call incidents, it’s still a terrible idea to involve emergency services when making prank calls. For those of you wanting to making similar prank calls, do it without causing panic or involving police and fire. I get the feeling that this prank caller is going to take it too far and end up causing some serious injury or death. And while “death by prank call” makes me giggle, I’d still hate to see someone have a TV land on them while innocently walking past a hotel.

To see just how easy it is to fool hotel guests by calling their rooms and claiming to be from the front desk, click here for our hotel prank calls.

Read the original story on cbc.ca

Discuss this story in the PLA Forums