Recently, while my friends Mr. & Mrs. Spessa were visiting, I casually mentioned to them that our local Taco Bell had a lot of groundhogs that wandered around on their property. Most of the groundhogs you’ll see behind a chain-link fence as you’re waiting in the drive-thru. After awhile, one thing led to another and we decided that it’d be the most hilarious idea in the world to make a sign and hang it on the fence. The sign would suggest that the meat from their tacos came from the nearby groundhogs. 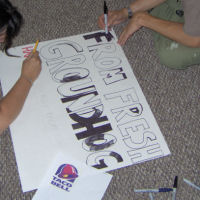 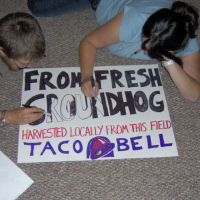 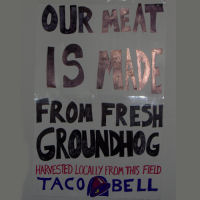 The next day we piled into the car to place the sign on Taco Bell’s fence. From my previous experience with the McDonald’s sign incident, I’d decided that hanging the sign right in the middle of the lunch rush would be the best time since the employees would be too busy working to notice us doing anything suspicious.

I also wanted to put it near the back of the drive-thru line but Spessa convinced me that putting it at the front would be best, because then the drive-thru customers wouldn’t be able to see the sign until after they were leaving with their food. Therefore they wouldn’t be able to tattle on us and they could notice that the taco they were biting into was actually groundhog meat!

We continued through the line of cars, waiting for our turn and buying a Pepsi so we didn’t seem too suspcious. At the very front of the drive-thru lane there were two parking spaces which appeared to be for drive-thru customers to wait if their meal was taking especially long to prepare. We pulled into the first space and I watched the line of cars behind us, waiting for a customer who didn’t look like they’d pay much attention to what was going on just 40 feet in front of them. I finally settled on the woman in the red SUV. I hopped out of the car and walked to the fence and casually as I possibly could as Spessa continously snapped pictures. 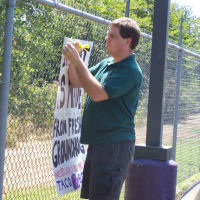 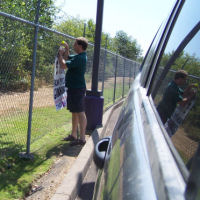 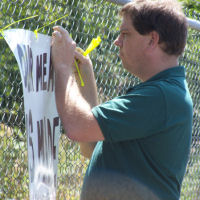 It probably took me less than a minute to hang the sign. I managed to not look suspiciously at the drive-thru window or line of cars while hanging on it, hoping that Spessa would warn me if an employee was about to attack me from behind. After hanging the sign, I calmly walked back to the car and got it. We looked behind us and nobody seemed to be paying any attention to us. So Mr. Spessa backed up so that Spessa could get a good close-up picture of the sign and then we drove off, stopping once more in the highway to snap another picture. As the lady in the red SUV pulled out of the drive-thru lane, we noticed that she was looking very intently at the sign I’d just placed. She’d probably noticed me hanging it while she waited for her food. Here are the pictures of the sign… 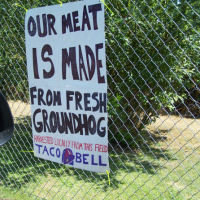 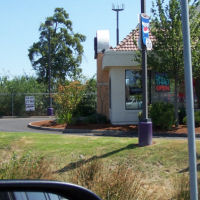 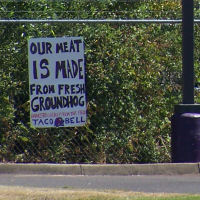 The three of us spent the next hour running a few errands around town. We decided to stop by Taco Bell on the way home to check on the status of the sign and maybe snap a few more pictures. The sign was still there and the lunch rush had slowed down considerably. We picked up some food at the McDonald’s drive-thru across the street and parked the car where we could have a clear view of the Taco Bell sign as we ate. We spent our time trying to judge whether or not customers were noticing the sign as they drove away. And we watched in anticipation as a Taco Bell employee walked right past the sign to bring a customer their food. He passed within 5 feet of the sign without noticing it. 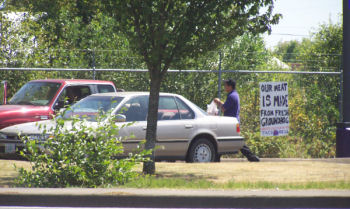 Finally we decided it was time to go home. We began to pull out of the McDonald’s parking lot when we noticed a man in a white car get out of his car and walk up to an employee who was sitting outside, smoking a cigarette. The man spoke to him briefly, pointing in the general direction of the sign. We quickly backed into our spot again to see if anything happen. The man left and the employee continued to smoke without even walking to the front of the building to see the sign. Finally he went back inside. Just as we thought nothing would come of it, a Taco Bell employee in a black shirt walked out of the front door. She marched up to the sign, put her hands on her hips and studied it for a minute. Finally she ripped the sign down and quickly walked back inside. Our prank was officially over. Or was it… 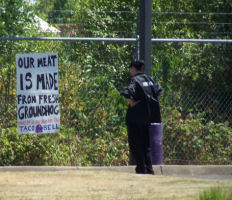 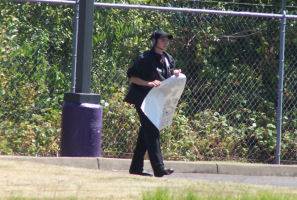 You’d think the prank would be over now, right? Well, there’s just one more small thing we did to really try and run it into the ground. I’d stopped by Taco Bell the next day to try and snap a few pictures of groundhogs for this page. There weren’t any out so I went through the drive-thru to order some food. I decided to claim to the drive-thru window guy that there was another sign hanging on the fence. So I did and he immediately yelled to the manager that there was another sign up. I indicated that the sign was hanging on the other end this time, pointing in the direction of the dumpster. He thanked me and I drove away. I videotaped the whole thing with my digital camera which you can watch here.

As I rounded the building to leave, I watched as two black-shirted girls walked out of the side door and headed straight for the fence. They scanned the fence for the new sign, not finding anything. They walked closer and then up and down the length of the fence hoping to find it. While all this was happening I snapped one last picture as I left, giggling hysterically at their confusion…

Feel free to post your own comments about this prank below. If you’d prefer to make a general comment about phonelosers.org, try signing our guestbook instead. Or you can discuss this page in our forums.

Alex from Texas – August 05, 2006: The calls after the prank are always the best. Thanks for pulling this prank. Is there any chance of taking over a movie theatre again with the help of Murd0ck? Please keep up the good work and please never stop pulling these hilarious pranks!

ML from Roy, New Mexico – August 06, 2006: I love this prank! The second call where the Taco Bell girl cusses is funny too!

1337Alien from Ohio – : You should put a sign on the drivethru that says: Order a GroundHog Burrito for a free meal.

Jay Maynard, Tronguy from – Fairmont Minnesota: This is against the law! You should be prosecuted for this stuff. You are OUT OF ORDER. I CALL THE QUESTION!

The Colonoel from KFC – August 09, 2006: So, you made a crappy sign, hung it on a fence, and when no one noticed it, you phoned them and told them it was there. Oh, AND THEN, in case there wasnt enough hilarity, you told them there was ANOTHER sign. Which there wasn’t. Oh yeah, you guys rule.

kcochran from Oregon – August 10, 2006: The Colonoel kan speel. I don’t think those are groundhogs, though, Meester ChiliPepper. I think those are nutria. http://en.wikipedia.org/wiki/Nutria – still, completely freakin’ hilarious!

Stu from North Carolina – August 10, 2006: AHAHAHAHA YES! I think we’re going to need a second sign. Make a post on the forums about it so we can give ideas for the new one!

Joe from alb, NM – August 12, 2006: That is awesome! I’m gonna have to start pranking fast food places… holy crap I laughed so hard I think I pissed my pants.

royseph from tijuana – August 13, 2006: It’s funny how much you can throw people off with such a simple concept. I mean, who’s gonna belive thatthey are selling groundhog? But taco bell people still got bent out of shape. Glorious.

frank from fremont ,ca – August 15, 2006: the taco bell by me is next to a graveyard. thanks for the insparation

Wild Bill Trendkill from Indiana – September 14, 2006: My God I have love everything I have seen and heard these guys do since I found ’em last year!

Mafia Tiez from CLT, NC – October 14, 2006: You have to admit that they had an original idea. I got few laughs as I was reading through it.

BM from Virginia – October 26, 2006: This is the stupidest prank I have ever seen. The best part is how the Taco bell folks think the joke is just as lame and stupid as your audience.

e-rock from canada – January 04, 2007: thats hilarious.. i happen to work at a t-bell in canada but unfortunately nothing like that ever happens to us which is too bad