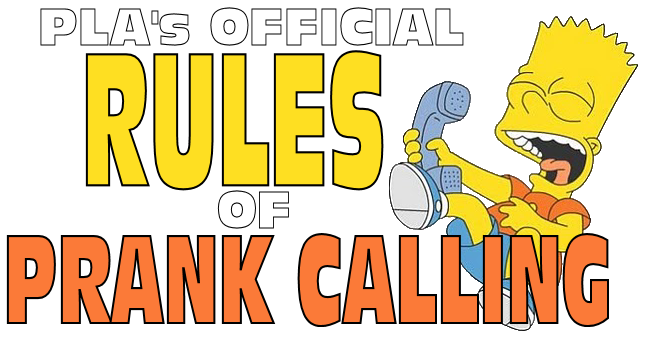 If you’re ready to delve into the amazing world of making prank phone calls, then you should spend just a few minutes reading this handy online guide so that even your first attempts at prank calling will seem somewhat professional and you might even avoid getting yourself arrested or killed.

Most of the rules revolve around trying to keep the authorities uninterested in your prank calls, which is good for everyone. Involving the police in your pranks is not only a threat to your own freedom, but it also ties up emergency services.  Follow these guidelines for a long, illustrious, jail-free career in prank calling…

KEEPING YOURSELF HIDDEN FROM CALLER I.D.

One of the most important aspects of prank phone calls is keeping yourself somewhat anonymous. If your victim sees your name and phone number on their caller I.D. display, it’s going to be harder to convince them that you’re calling from a major company. And if your victim knows your phone number, then they’re obviously going to try and take some kind of action against you. Here are a few ideas on keeping your number hidden from the people you call.

We all know about the standard prank call, where you call up a phone number and you start talking to the victim. There is a lot more you can do than that, though. Here are some other types of prank calls that you’ve probably never thought of.

So what are you waiting for? If you really just read this entire guide to prank calling, then you owe it to yourself to pick up a phone right now and do it! That’s right, pick it up and start dialing. There you go. Wait! What the hell, man, you’re dialing locally? Have you not learned anything here??? God, I hate you. Go back and read all this again right now!

32 thoughts on “Rules of Prank Calling”